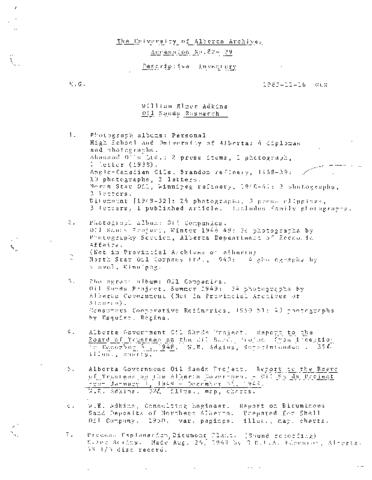 William Elmer Adkins was born in Burnt River, Ontario on August 4, 1915. He attended public and high schools in Medicine Hat, Alberta where he graduated with honours and scholarships in 1933. He graduated with a B.Sc. in Chemical Engineering from the University of Alberta in 1937. He completed post-graduate studies with Dr. E.H. Boomer from 1937-38. In 1938 he became the superintendent of the International Bitumen Company Ltd, a pioneer oil sands venture from R.C. Fitzsimmon. He was made responsible for the design and construction of the Bitumount oil sands extraction plant, 80 km north of Ft. McMurray. He oversaw the shipment of the first commercial tar sand from the plant in 1938: roofing asphalt sent to Gary, Indiana. From 1938 to 1941 Adkins worked with Born Engineering Co. of Tulsa, Oklahoma. He supervised or participated in the construction of Dubbs Thermal Cracking Units and other types of oil refinery units at Anglo-Canadian Oils in Brandon, Manitoba; Gas and Oil Products in Turner Valley, Alberta; Consumer Co-operative Refineries in Regina, Saskatchewan; and North Star Oil in Winnipeg, Manitoba. In this period he was appointed to direct Canadian operations for Born Engineering. In July 1941 Adkins joined Defence Industries Ltd., first as a maintenance engineer in Transcona, Manitoba and then as Resident Engineer in Nitro, Quebec. In 1945 he joined Oil Sands Ltd. of Edmonton, Alberta and the following year he was appointed superintendent of the Alberta Government Oil Sands Project, to build and operate a demonstration plant at Bitumount. This was the original International Bitumen Company Ltd. plant. The plant was closed in 1942 and Lloyd Champion purchased the site anc created Oil Sands Ltd.with the intention of supporting the government's plan to develop the Alaska Highway. Champion intended to sell tar sand to the project for use as a road surfacing agent and convince the provincial government to place a $500,000 investment in the project. By 1948 the government had taken over the project and it became known as the Alberta Government Oil Sands Demonstration Plant. Elmer remained plant superintendent for the project's 6-year life until it closed in 1951. During his tenure he initiated several effective labour initiatives that continue today. He brought in a 10 per cent isolation bonus, a policy widely adopted in other northern projects. He also brought the first snow mobiles to the area to help relieve a bit of the isolation. By 1949, the Demonstation Plant at Bitumont was processing dailly 450 tonnes of oil sand. To promote this success the entire provincial legislature was brought to the plant and Adkins oversaw the demonstration. In April 1950 Adkins started a consulting practice in association with Born Engineering. He continued a consultant to the Alberta Government Oil Sands Project. During this period he also completely remodeled and enlarged the Consumers Co-operative Refinery in Regina, Saskatchewan. In June 1951 Adkins joined Domtar Inc. as a project engineer on their ethelyne glycol plant in Montreal, Quebec. He was appointed Chief Engineer, Domtar Inc in 1953. He eventually became Domtar's Vice-President, Development, Research and Engineering before leaving the company for earlly retirement in 1967. In July of 1967 he became President of Champion Savings Corporation, and Champion Mutual Fund, he was previously a director in both companies. He He succeeded Lucien Maynard, Q.C. as President of Oil Sands Ltd. in 1967. He subsequently resumed a private consulting practice boasting such clients as Great Canadian Oil Sands Ltd., Czarnicow Ltd., Sugar Refiners and Brokers, and the Foundation Company of Canada. Betwwn 1969 and 1974 he worked on the liquidation and distribution of assets of Oil Sands Ltd. to shareholders and debenture holders of Oil Sands Ltd. and International Bitumen. Adkins spent his retirement in Victoria with his wife Evelyn. He passed away in 1985.

William Adkins donated his material to the University of Alberta Archives in 1982.

All the William Elmer Adkins material is open to researchers.