General Correspondence – Personal letters, re: various matters; many concern the sending of troop overseas for the War, and the possibility of Steele being named Commander; includes letters from H.J. Woodside who wrote to authorities to tell them that Steele was two years younger than his official age, hoping this might help in having Sam appointed; includes letters from family and friends. Handwritten; Typewritten.

General Correspondence – Personal letters, incoming and outgoing, re: various matters; further correspondence related to military forces being sent to Europe, and letters from family and friends; includes a hand-written letter to brother-in-law Beau (C.A. Harwood) discussing the pending war and Canadian military efforts, as well as the Escher investigation into the conduct of soldiers in the South African war. Handwritten; Typewritten.

General Correspondence – Personal letters, incoming and outgoing, re: various matters; including Steele’s letters to C.A. Harwood (the one dated 30 Oct 1914 marked by H.S. ‘for use only if necessary); letter and documents related to Steele being appointed a Police Magistrate for the Province of Manitoba; a letter from a distraught Jessie Ross asking that Steele do all in his power to keep her son Don from joining a military unit for the war; and other military/WW1-related personal correspondence. Handwritten; Typewritten.

Handwritten letter from Harwood with the "A" Section, 3rd Field Ambulance, Valcartier, Quebec to Marie in Winnipeg; 7 pp. and envelope.

Letter to Marie from Harry Edwards 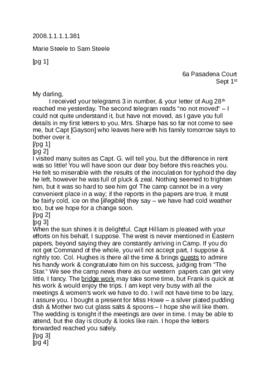 Handwritten letter from Marie in Winnipeg to SBS in [Quebec]; 2 pp.

Correspondence sent to and from SBS in his capacity as Colonel in Command of Military District #10, based at the Fort Osborne Barracks in Winnipeg; correspondence around the war in Europe and including volunteers for military service; Commission requests; a request from SBS to Robert Rogers asking that Harwood Steele be taken on with the Department of Naval Affairs; a letter from SBS to Lady Strathcona (Lord Strathcona’s daughter) asking for her help in requesting that Lord Strathcona’s Horse Regiment be sent to the front; a printed lecture copied to Steele on “Important Points to be Considered by Guides of the Canadian Service Employed in the Present Campaign” by Captain A.C. Garner, Corps of Guides, Canada; memo regarding mobilization, etc. One interesting letter from the Assistant Private Secretary, Militia and Defence Canada, has SBS's terse comment scrolled on the bottom of the letter: "This man is ignorant". Handwritten; typewritten

Correspondence sent to and from SBS in his capacity as Colonel at Valcartier Camp, established as part of the mobilization of the Canadian Expeditionary Force at the onset of the First World War; includes letters sent between SBS and Robert Rogers outlining in some detail suggestions for organizing the Canadian Contingents; a telegram and letter from Major Ketchen regarding Harwood Steele and his enlistment; a note from SBS saying he will spend some time in Montreal while awaiting whatever military assignment he should receive, etc. Handwritten; typewritten

Correspondence sent to and from SBS in his capacity as Colonel at Valcartier Camp, established as part of the mobilization of the Canadian Expeditionary Force at the onset of the First World War; includes correspondence to and from Sam Hughes, re: what SBS’s role will be in terms of the First Canadian Contingent; letters from individuals volunteering for military appointments; letters from SBS to Robert Rogers expressing frustration at the way he is being treated and at Hughes actions; etc. He is particularly upset by Hughes' dismissal of Henry Norland Ruttan whom Steele had recommended for brigadier. Handwritten; typewritten

Correspondence sent to and from SBS in his capacity as Colonel at Valcartier Camp, established as part of the mobilization of the Canadian Expeditionary Force at the onset of the First World War; includes correspondence around questions of who will command what in terms of Canadian Contingents fighting in the War; personal correspondence concerning questions around the leadership and training of forces; a telegram about poor quality horses and SBS’s request that he not be sent back to Valcartier; telegrams to Major Ketchen about Harwood Steele’s proposed military enlistment, etc. Handwritten; typewritten

Standing Orders of an Army on the March in Canada as dictated by Sir Percy Lake. Orders sent to Steele by Alex Bertram, and include his covering letter. Typewritten copy; 3 pp.