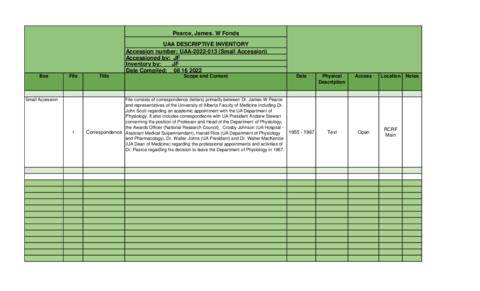 Dr. James William Pearce was born in 1924 in Northern Alberta, Canada. He obtained M.D. and C.M, from Queen’s University in 1947. Following his time at Queen’s he spent some time doing clinical medicine before beginning his studies at Magdalen College, Oxford in the United Kingdom. It was at Oxford that he received his qualifications in physiology.

Records donated by Gwyneth Pearce (daughter of Dr. J.W Pearce). The records have been in the custody of the family since the passing of Dr. Pearce until the time of donation to the UA Archives.

Contents of the file are in good condition.

A finding aid for the file has been created and attached to the accession page.

Further accruals may be expected.