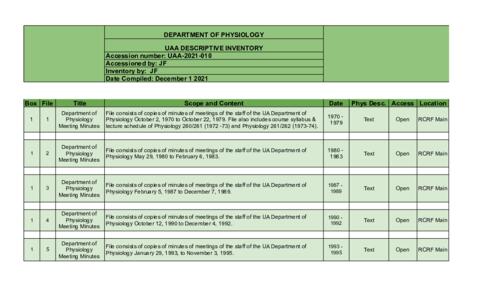 The accession comprises 15 cm of copies of minutes of meetings of the University of Alberta Department of Physiology.

The University of Alberta's Department of Physiology is a teaching and research-intensive department focusing on advanced studies in cardiovascular physiology, cellular and systems neurophysiology, cellular and molecular physiology, endocrinology, fetal/neonatal physiology, membrane biophysics and transport physiology, renal physiology, respiratory physiology, vision, and the interfaces between these fields.
The department originated from the Faculty of Medicine, which was founded in 1913, five years after the official opening of the University of Alberta. Until 1922, only the first three years of the medical course were offered at the university. Students completed their courses at one or another of the eastern Canadian medical schools.
The first Professor of Physiology and Pharmacology was H. H. Mosher, who maintained this role from 1914 to 1916 with the part-time assistance of I. R. Bell. Teaching of all basic sciences continued until 1920-1921 - when the Medical Building (the present Dentistry/Pharmacy Centre) was completed - and was conducted on the third floor of the women's residence, Pembina Hall. In 1916, Mosher went overseas with an army of field ambulances, which necessitated the need for a new professor.
J. B. Collip joined the department in the fall of 1915, and from 1916 onwards was in charge of the teaching of physiology and pharmacology, as well as biochemistry. Due to the mass returns from the Armed Forces during 1919, the demand for admission to the Medical School increased substantially, and between 1920-1921, the Medical Building was constructed. At this time, the east and west wings were not present, as they would later be completed and additional departments would be added to the already existent basic medical sciences. On Collip's departure to eastern Canada in 1920, A. W. Downs became Head of Physiology and Pharmacology until his retirement in 1949. By 1926, when a full medical course was given, the department had a staff of three.
Professor H. V. Rice succeeded Dr. Downs in 1949. Rice was enthusiastic about electronics and his love for the design and manufacture of electronics and other instruments grew over time, so that in 1955 he resigned in favor of a position in charge of the Medical Engineering Section of St. Paul's Hospital in Vancouver.
After Rice’s resignation in 1955, Dr. J. W. Pearce became the new head of the department and remained in charge of teaching physiology and pharmacology until a separate Department of Pharmacology was set up in 1961. Dr. Pearce continued as Head of Physiology until his resignation in 1965. The department had offered the degree of MSc since the twenties, but PhD's have only been offered since Dr. Pearce's tenure.
Then present chairman, Dr. M. Schachter, was appointed Head in 1965. During the period of time from the mid-sixties to the present, the department developed into a strong research and teaching department. Several of the staff members have excellent international reputations, and research funding from external sources exceeds one million dollars per year. Appointments to the department over the years include: Dr. E O Höhn in 1947, Drs. M. Schachter and S. M. Padsha in 1965, Dr. R. B. Stein in 1968, and Drs. K. J. Hutchison, S. C. Barton and K. G. Pearson in 1969. Further appointments were as follows: Drs. A. S. French and E. J. Sanders in 1970, Dr. M. J. Poznansky in 1975, Dr. E. Karpinski in 1976 and Dr. C. I. Cheeseman in 1979. With the availability of funding from the Alberta Heritage Foundation for Medical Research, two Scholars were successful applicants and were appointed at the Assistant Professor level in 1982: Drs. G. A. Bourne and S. M. Jarvis.
The department currently has 36 academic staff members, including professors who are cross-appointed in Biochemistry, Cardiology, Dentistry, Nephrology, Nutritional Science, Obstetrics & Gynecology, Ophthalmology, Pathology, Pediatrics and Psychology. The department’s current chairman is Dr. James Young.

The records were retained in custody of Esmond Saunders, professor and chair of the Department of Physiology.

The accession consists of copies of minutes of departmental staff meetings of the Department of Physiology,

Esmond Saunders (with written authority of the current Chair - Department of Physiology). The records were mailed directly to the UAA.

The minutes are arranged chronologically by date of meeting.

As per Department Schedule.