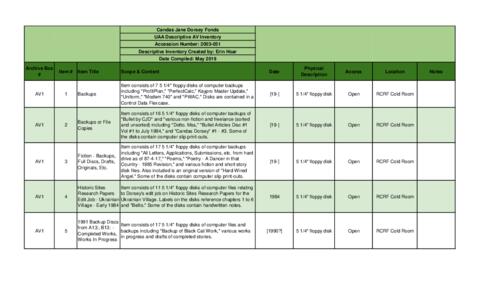 Candas Jane Dorsey was born in Edmonton, Alberta, Canada on November 16, 1952. She was educated at the University of Alberta where she earned a Bachelor's Degree in Social Work from the University of Calgary (Edmonton branch) and also a combined B.A. with distinction in English and Drama (1975). Candas subsequently earned a Master of Fine Arts from a British Columbia institution.

Candas worked as a social worker and child care worker in the 1970s and as of 1979, has primarily worked as a publisher, writer and editor in the fields of science fiction, fantasy, arts, poetry and journalism. Candas went on to edit and manage the monthly arts newspaper The Edmonton Bullet (1983-88) and in 1991, became a founding partner of Wooden Door and Associates, a professional communications company. The following year, Candas was founding member of The Books Collective, an independent trade publisher, which included roles as publisher and editor-in-chief of Tesseract Books (an imprint of The Books Collective) and River Books. Between 1990 and 1992, Candas held numerous Writer in Residences including with the Edmonton Public Library (1990), the St. Albert, Sherwood Park, Fort Saskatchewan Public Libraries (1991) and the Leighton Artists Colony (1992). She became an educator of professional writing programs and writing-related courses and workshops for Grant MacEwan College, University of Alberta Faculty of Extension and Metro Continuing Education, and a Sessional Instructor for MacEwan University’s Bachelor of Communication Studies program.

Candas’s range as a writer includes fiction and nonfiction, short and long form, as well as journalism and advocacy, television and theatre scripts, magazine and newspaper articles and technical writing and manuals. Her published works include Machine Sex: And Other Stories (1988), Black Wine (1996), Vanilla and Other Stories (2000), A Paradigm of Earth (2001) and has contributed to the Tesseracts anthology series. She has also worked on stories for young adults and children.

Candas has an active role in her community of Edmonton, serving as a community activist for non-profit organizations and community leagues, a civilian member of a Community/Police Liaison Committee for the Edmonton Police Service and in 2013, was a Ward Six Candidate for Edmonton City Council. In the literary field, Candas is past President of SF Canada (Canada’s National Association of Speculative Fiction Professionals), and former Vice-President (1992-93) and President (1993-94) of the Writers’ Guild of Alberta. Throughout her career, Candas has been invited to several conferences and speaking engagements, some internationally, to speak on speculative fiction and other topics.

Candas Jane Dorsey is the recipient of many honours and awards including a City of Edmonton Arts Award (1988), the Aurora Award from the Canadian Science Fiction & Fantasy Association (1989), the James Tiptree Jr. Memorial Award for Black Wine (1998), the Writers’ Guild of Alberta Howard O'Hagen Award for Short Fiction for Vanilla and Other Stories (2001), an Alberta Centennial Gold Medal (2005) and the Writers’ Guild of Alberta Golden Pen Award for lifetime achievement (2017). In 2018, she was inducted into the Canadian Science Fiction & Fantasy Hall of Fame.

RAD. Exception made on floppy disks and reels.