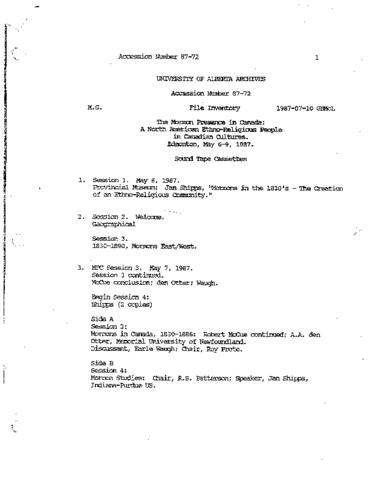 Brigham Young Card, born in Cardston, Alberta to a prominant Morman family, received his BSc (1942) and BEd (1947) from the University of Alberta, and his PhD from Stanford University (1959). He began his teaching career at the University of Alberta in 1945 and joined the Faculty of Education in 1950. In 1967, he became a full professor in the field of Sociology of Education. Dr Card retired from the University in 1979, and was appointed Professor Emeritus in 1981. From 1981-1984, B.Y. Card taught at Red Deer College, and in 1984 was awarded the Sir Frederick Haultain prize in social sciences for introducing and developing educational sociology in Alberta. His major research interests included: community development, Indian and Metis culture, and the sociology of Mormonism. The Cards retired to Lethbridge, and Dr. Card passed away there ca. 2004. B.Y. Card was born in Cardston, Alberta on March 11, 1914. He is the great-grandson of the prominent Mormon leader, Brigham Young, and the grandson of Charles Ora Card, who led a group of Mormon settlers from Utah to Southern Alberta to settle in the area later named Cardston in honour of the Card family. B.Y. Card studied science at the University of Utah and the University of Alberta, and served as a Mormon missionary to French-speaking Switzerland from 1938-1940. B.Y. Card enlisted with the Canadian Army from 1942-1945, working on assignment as a research physicist in Special Services at the Suffield Army Experimental Station in Alberta. In 1945, Card enrolled in a PhD program at Stanford University in California studying educational sociology. His thesis was completed in 1959 with a dissertation entitled American Educational Sociology from 1890-1950 - A Sociological Analysis. He began lecturing at the University of Alberta in 1950, teaching the only sociology course offered at the University. His research focused primarily on social change in Western Canadian communities, and with comparative sociology of education. While at the University of Alberta, he helped organize the Campus Cooperative Residence, the LDS Club, the Department of Educational Foundations, Intercultural Education, Community Development, and Community Education. After a long and active research and teaching career with the University of Alberta, B.Y. Card retired as Professor Emeritus of the Department of Educational Foundations in1979. He was an adjunct professor at Brigham Young University from 1980-1981, and taught at Red Deer College from 1981-1984. In 1984, he was awarded the Sir Frederick Haultain Prize in social sciences for introducing and developing the field of educational sociology in Alberta. B.Y. Card is retired and living in Lethbridge, Alberta where he continues his research and writing activities

Conference: "The Mormon Presence in Canada: A North American Ethno-Religious People in Canadian Cultures" (Edmonton) - correspondence, proceedings and recordings of the sessions.