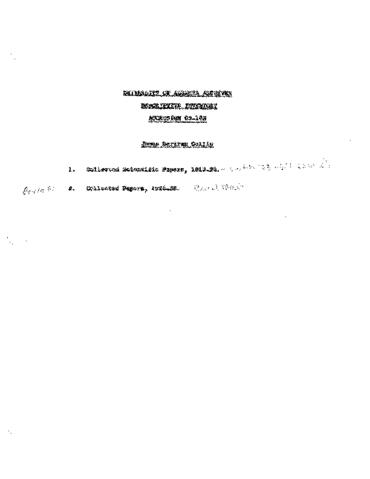 Biochemist, 1892-1965. Dr. Collip came to the University in 1915 as a lecturer in physiology and biochemistry. In 1921 he received a Rockefeller Scholarship at the University of Toronto, where he contributed significantly to the research on insulin and shared in Banting's and MacLeod's 1923 Nobel Prize in Medicine. Dr. Collip returned to the University of Alberta in 1922 as a professor of biochemistry. He attained his MD in 1926. In 1928 he joined McGill University as head of the Biochemistry Department, and from 1947 to 1961 he was Dean of Medicine at the University of Western Ontario. Here he was Head of the Department of Medical Research, which he founded, until his death in 1965. Recent scholarship has enhanced Dr. Collip's role in the development of insulin. Together with his other contributions in endocrinology, including his isolation of the parathyroid hormone during his tenure at the University of Alberta, he stands as a major figure in medical history.