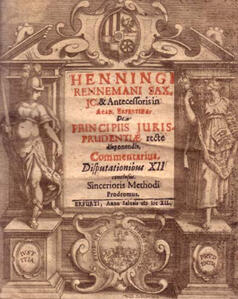 The Salzburg Collection is one of the most important collections in Canada for Central European law studies. It represents the original law collection of the Seminary Library of the Archbishop of Salzburg, acquired by the University of Alberta in 1965. Bruce Peel Special Collections houses the pre-1800 publications, considered rare books. The newer, post-1800 publications, which represent about half of the collection, are housed in other locations, including the John A. Weir Memorial Law Library, the Research & Collections Resource Facility, and the Humanities and Social Sciences Library.

Following the recommendations of the Tridentine Council (Tridentinischer Konzil) of 1562, the Salzburg Provincial Council (Salzburger Provinzialkonzil) established the Archiepiscopal Seminary in Salzburg (Erzbischöfliches Priesterseminar zu Salzburg) with its decree of May 25, 1579. Its first statutes were written and signed in July 1579 by the rector, Georg Würfel. The library was founded at the same time as the seminary, with books contributed by the private library of the Archbishop.

Items are arranged alphabetically by title.

This list of all +3,500 items found in the Salzburg Collection was compiled as part of the Salzburg Project. The project was established in 2006 by Erika Banski, who at the time was Germanic Studies Librarian at the University of Alberta Libraries. Its goal was to add a local note to all relevant MARC records in the online catalogue of all items belonging to the Salzburg Collection. This was done by physically identifying the books of the collection by their unique bookplate, which reads “Ex Libris Universitatis Albertaensis: Bibliotheca Archiepiscopalis Salisburgensis.” The outcome of the project was to make it possible to retrieve the Salzburg Collection bibliography from the catalogue, which could then be used by researchers to access the collection. It was also their intention to create a print and/or online bibliography for distribution, and, with the resources and time permitting, they published the bibliography online as a searchable database.

The first phase of the Salzburg Project was completed in April 2006 by Sherri Smith, a practicum student from the Library Technician Program at Grant MacEwan College in Edmonton. She physically examined all books in Bruce Peel Special Collections and marked the relevant shelf list card for every book that contains the special bookplate.

The second phase of the project was conducted in the 2006-2007 academic year by Louis-Mathieu Paquin, an MA student from the Department of Modern Languages and Cultural Studies, University of Alberta. Louis-Mathieu worked in the Library’s SIRSI catalogue: he used the BPSC marked shelf list cards to identify MARC records describing these books in the library catalogue and added the note “UA Library copy from the Priesterseminar library of the Archbishop of Salzburg” to every relevant record. As needed, he also edited the records to reflect correct German orthography and included title added entries with normalized Latin spelling. Erika proofread the record set and upgraded all brief MARC records to full cataloguing level.

In the 3rd phase of the Project, Louis-Mathieu designed a website and searchable database of the collection under the guidance of Peter Binkley, Digital Initiatives Technology Librarian. The MARC records were extracted from SIRSI and converted into the MODS metadata schema coded in xml. Peter’s Online Bibliographic Database Publishing toolkit, developed for the Peel’s Prairie Provinces site, served as the basis for the website. With the help of Robert Desmarais, at the time Assistant Special Collections Librarian who advised on the final design and content of the site, the website was launched in April 2007, coinciding with the Annual Conference of the Modern Austrian Literature and Culture Association (MALCA), held at the University of Alberta, April 13-15, 2007. Louis-Mathieu and Erika gave a brief presentation about the Salzburg collection at this conference.

In June 2019, the archived website was migrated into to Discover Archives.

Link to essay about the collection: https://web.archive.org/web/20110930233547/http://www.library.ualberta.ca/specialcollections/printer_friendly/salzburg_essay.html