Fonds - Provost and Office of the Vice-President (Academic) fonds 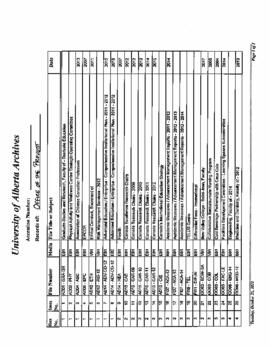 Provost and Office of the Vice-President (Academic) fonds

Dr. Max Wyman joined the University staff in 1943 as a Mathematics lecturer. He became a full professor in 1956, Chair of the Department of Mathematics in 1961, Dean of Science in 1963, Vice-President (Academic) in 1964 and president of the University in 1969, which position he held until his retirement in 1974. In 1976 Dr. Wyman was appointed University Professor. Other areas of service included work on various commissions, including the Alberta Electoral Boundaries Commission and the Board of Review for Provincial Courts in Alberta (Kirby Commission). He also served as Chair of the Alberta Human Rights Commission, 1974-1979. He is also noted for being an Alberta Junior Golf Champion and for having famously written to Albert Einstein about an error in Einstein’s paper 'The Influence of the Expansion of Space in the Gravitational Fields Surrounding Individual Stars.'

He was made an officer of the Order of Canada in 1990 and received seven more honorary doctorate degrees. The University of Alberta campus features The Myer Horowitiz Theatre in his honour.

Fonds consists of records pertaining to the Office of the Provost and Vice-President (Academic) at the University of Alberta.

Some records may be restricted. Contact archive staff for further information.