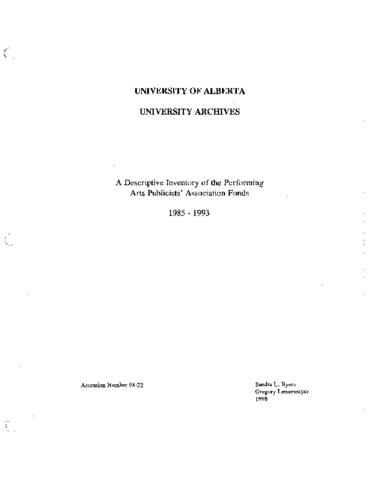 The Performing Arts Publicists' Association of Alberta was founded in Edmonton in November 1985 as a non-profit society by local arts publicists as anorganization with the two-fold aim to serve their professional development through seminars, discussion groups and guest speakers and to promote better media and public awareness of arts events. The founding president was Debi Breen of Northern Light Theatre. With the formation of a branch chapter in Calgary, PAP A was incorporatedas a provincial organization and became eligible for provincial funding.
Its most notable public achievement was to establish under the presidency of Dave Jackson, then of Phoenix Theatre, the annual Elizabeth Sterling Haynes Awardsfor excellence in Edmonton Theatre in 1987-88. The awards were named in honour of one of the great pioneers of theatre development both in Edmonton and throughout Alberta. Over the next several years the Sterling A wards dinner and program became the highlight of the Edmonton theatre season. However, after the 1992-93 awards, PAPA relinquished management of the Sterlings to the professional theatre community, who formed The Elizabeth Sterling Haynes A wards Committee under the cochairmanship of Jeff Haslam and Judy Unwin.
While the 1993-94 awards were technically under the auspices and regulations of PAPA, the re-organized categories and jury system of the independent committee of professional theatre practitioners were in place for the 1994-95 season. In the meantime PAPA itself lost momentum as a professional organization, largely because Edmonton theatre managements, under the pressures of austerity, began shifting from full-time to contract publicists. The records of PAPA were placed in the University of Alberta Archives by its last president, Ann-Lisa Jensen of Horizon Stage.

Fonds consists of records pertaining to the Performing Arts Publicists Association of Alberta including administrative records.