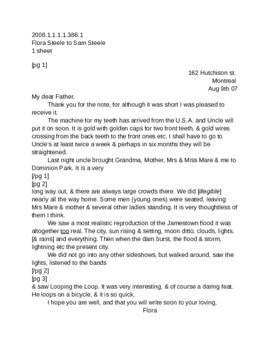 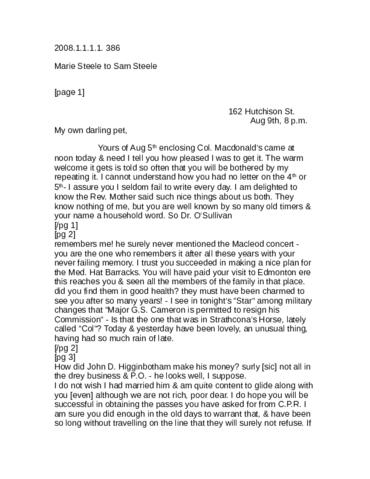 Born at the Fort Macleod Mounted Police Barracks in 1891, Mary Charlotte Flora MacDonald Steele (better known as Flora) was daughter of Sir Samuel Benfield Steele and his wife Marie (nee Harwood). Flora spent much of her childhood at Fort Macleod (in present-day Alberta, Canada) where her father was in command of the Macleod District. It was here that her two younger siblings, Gertrude and Harwood were born as well. In August of 1898 Flora, her mother and her siblings moved to Montreal while Sam took a police posting in the Yukon. Throughout Sam’s posting in the Yukon and later deployment to South Africa to fight in the Boer war he and Flora corresponded regularly and she was often told to be good to her mother and look after her siblings.

Flora served as a V.A.D. during World War I. In 1919 she returned to live with her mother in Montreal and in that same year her father died. Flora’s life following the war was marked by devotion to her family (she often looked after Harwood’s affairs while he was abroad and kept watch of the family’s finances) and her interests in religion, spiritualism, and Asian cultures. Her interest in Asian cultures was best exemplified by her involvement, as a volunteer, in McGill University’s Hung Tao Society during the 1930s and 1940s. [Description of Hung Tao Society can be added in that series’ description]. Throughout her life, Flora wrote poetry, short stories and submitted articles for publication. [Flora’s education should be added here] Flora, at Sam’s urging, studied both German and French during her childhood. Later, as an adult, Flora also learned Chinese [This is evidenced by a page of Chinese script signed with her English signature]. Flora never married, however, there is implicit evidence (in the form of a short story named “Love and a V.A.D.” and a presumably related letter to an Australian suitor) that she did date a number of men during her younger years. Flora died on October 19, 1948 and was survived by her mother and siblings.

Handwritten letter with envelope from Marie in Montreal to Sam in Calgary, 09 Aug. 1907. Includes an attached letter from Flora Steele.