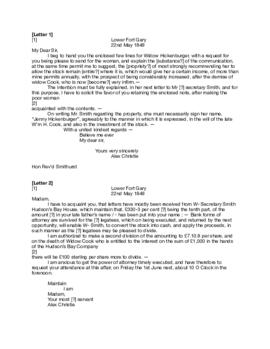 1849 (May) from Alexander Christie to Rev. John Smithurst and Jenny Hickenburger

Part of Life, Events, and Players in the North-West

Notes: A pair of letters both written on the same day concerning the same matter. The first is written to "Mrs. Jenny Hickenburger" and the other to Reverend Smithurst regarding the death of Jenny Hickenburger's father. The letter requests that she attends Christie's office to sign the necessary paperwork for her to inherit her father's money. The letter to Smithurst requests his assistance in ensuring that his cousin does not redeem her HBC stock and instead accepts £9 per year as income.