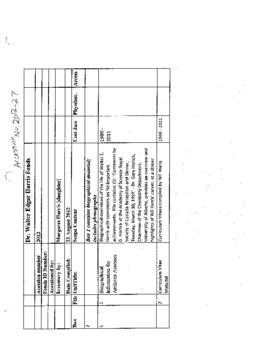 Drafts of "Department of Chemistry - History and Memoir" by WE Harris

WE Harris is Professor Emeritus - Dept of Chemistry

First edition of the Chemistry 312 laboratory manual (two copies). One copy has extensive handwritten notes and revisions by WE Harris.

Material from Office of SG Davis, 2006

Chemical Analysis, by HA Laitenen, published by McGraw-Hill. First edition of book, with notes throughout by WE Harris. Also contains enclosures: index cards with notes for a March 1971 meeting; two pages of comments by WE Harris; review of book by Pilipenko; and revision recommendations by Mc-Graw Hill 1960.

Chemical Analysis, 2nd edition by HA Laitenen and WE Harris, published by McGraw-Hill. Contains notes and corrections throughout by WE Harris. "This copy has all the collated corrections."

A draft with notes by WE Harris.

Various articles written by WE Harris on the topics of PCBs, Dioxins, Risks, Population and Resources, and Bioethanol.

Correspondence, notes, and other information about the Chemistry Data Sheet that was organized and copyrighted by WE Harris and SG Davis. File includes negatives and prints of various periodic table designs. File also includes an envelope addressed to University Archives (BARD), containing a memo from WE Harris, October 2006, describing the history of the Chemistry Data Sheet by WE Harris and SG (Stuart) Davis, and copyright registrations.

This large volume was compiled and bound by the secretaries of the Chemistry Department as a gift to WE Harris.

Personal thoughts by WE Harris written for family; includes: Career and financial topics; Early years in the Nashville [Alberta] district; Graduate school, marriage, career; Career reflections; Uranium; House sale and move; A Sunday analysis [about climate change and energy]; Memorial Raymond [older brother]; Memories of bridge; Personal thoughts on religion and science ; and includes an envelope of photocopies of photographs and one slide.

Book, "Programmed Temperature Gas Chromatography" by WE Harris and HW (Harry) Habgood, 1966, and reviews of book. Copy contains handwritten thanks to Phyllis Harris by Harry Habood and Walter Harris (see first page inside cover). WE Harris: "This is the first book to be published in the Department of Chemistry at the University of Alberta."

Announcements, lecture notes, newspaper articles, etc for talks given by WE Harris.

Notes for presentation to Edmonton Planned Parenthood AGM, 29 March 1999, on the topic of birth control, population and resources.

Notes for lecture at Edmonton public library on the topic of Critical Resources.

Mailout of Article and Responses

Correspondence regarding article "Three Critical Resources" by WE Harris.

Correspondence, notes etc regarding article by WE Harris, "Three Critical Resources" which was published in New Trail, 1978.

Notes for course lectures, some on index cards.

Essays submitted by students on topics relating to energy and use of resources.

Course outlines, correspondence and notes for AGFOR 300, "Man and Resources".

Articles and notes about energy and resources; includes notes by WE Harris and articles by Dr. F. Bentley and Dr. R. Folinsbee.

Reports and correspondence; includes thank-you letters from students and Course Guide published by the University of Alberta Students' Union, 1968 (p. 24 has comments on WE Harris' course).

Submissions to the Millennium Project, 1999

WE Harris submitted three essays to the University of Alberta Association of Professors Emeriti for possible publication in their millennium project. The second essay was accepted and later published in "Echoes in the Halls." File contains "Submissions to the Millennium Project, 1999," with three essays: (1) Personal thoughts on religion and science; (2) President's Advisory Committee on Campus Reviews; (3) Aspects of the life of an analytical chemist. File also contains "Echoes in the Halls" by the Association of Professors Emeriti, 1999, which includes on p. 161 a chapter by WE Harris, "Looking at Ourselves: The President's Advisory Committee on Campus Reviews," along with correspondence, notes etc.

Report "Costs Involved in an Analytical Laboratory Course, Chemistry 312" by D.R. Weir, prepared for WE Harris 1963-64.

Notes for Chemistry 312 lab practical test. This test was held in the laboratory every fall for incoming students, to get an indication of where they needed to improve.

Correspondence, notes etc regarding travel and attendance at the conference. Includes manuscript: "A system for the Identification of Gas-Chromatographic Peaks by Pyrolysis Gas Chromatography with High Speed Temperature Programming" by RR Goforth and WE Harris. Few conference materials in Danish.

Correspondence, notes etc regarding travel and attendance at the International Congress of Pure and Applied Chemistry (IUPAC), Prague, 1967. Various materials in German.

Program, correspondence, notes etc regarding the holding of the 1966 ACS symposium. "First one held outside the U.S."

Correspondence, notes etc regarding prepration for the 1966 ACS Symposium. Roy Keller was Program Chair and WE Harris was Local Arrangements Chair. File includes an overhead photograph showing the University of Alberta campus. Film strip with images of the University emblem.

Correspondence, notes, etc regarding planning for the American Chemical Society's 1966 symposium to be held in Edmonton, Alberta.

Correspondence, phamlets, notes etc regarding attendance at the Symposium in Madison, Wisconsin.

Correspondence, notes etc regarding a speaking tour for the Chemical Institute of Canada.

Notes for presentation "Some Chemical Effects of Nuclear Transformation in the Alkyl Halides," and correspondence regarding manuscript "Chemical effects of the activation of bromine in the alkyl bromides: the halomethanes."

Report, notes, and map regarding a consulting project on marl by WE Harris in the 1950s: "Big Lake Marl Deposit and Summary of Marl Surveys."

"The Memoirs of Herbert August Laitenen, 1915 - 1991" with notes by WE Harris, p. 36-37. Herb Laitenen was a colleague of WE Harris at the University of Minnesota, and co-author of the textbook "Chemical Analysis" 2nd edition.

"The Polarography of Uranium" by WE Harris, Ph.D. Thesis submitted to the University of Minnesota, May 1944. Contains correspondence, including letters from Henry Heal, National Research Council of Canada, 1945.

Determination of Mercaptan in Latex

Report for the wartime rubber project: "Preliminary Report III. The Determination of Mercaptan in Latex by Amperometric Titration with Silver Nitrate in Ammoniacal Alcoholic Medium" by IM Kolthoff and WE Harris, June 15, 1943.

Expenses and other notes.

Listing of expenses incurred by WE Harris during his undergraduate years at the University of Alberta, 1934-5 and 1936-7.

Cardboard box contains slides used by WE Harris in early lectures. Slides made by Department of Extension at the University of Alberta.

"Kodak plates" cardboard box contains slides used by WE Harris in early lectures. Slides made by Department of Extension at the University of Alberta.

KCA 60 videocassette of lecture by WE Harris, "Three Critical Resources, Decisions and Society" for course AGFOR 300 titled "Man and Resources".

KCA 60 videocassette of lecture "The Three Critical Resources, Decisions, and Society with WE Harris", Sept 30, 1976. Harris' critical resources being: time, intelligence and energy.

KCA 60 videocassette of interview of WE Harris: "Questions on The Three Critical Resources, Decisions, and Society with WE Harris", Sept 30, 1976. Questions came from students in his" geography" class and were read by Margaret Harris. List of questions can be found on the inside of the videocassette case, mainly concerning nuclear power. This is the preceeding video to item 247.

Audiotape of lectures given by visiting scholars A. Vlcek and Harrison Brown. Audiotape contains: A. Vlcek lecture 1, Polarographic background, Sept 8, 1961; A. Vlcek Lecture 2, Effect of Precoding(?) Reactions, Sept 11, 1961; A. Vlcek lecture, Science and Education in Czechoslovakia; Opening Ceremonies, May 25, 1961 - Future of Industrial Civilization - Brown; HS Brown - Chemistry of Planets; CKUA Interview, HS Brown; Science is an Irish Potato - Brown. A. Vlcek was a visiting chemist from Czechoslovakia; H. Brown is the author of "The Challenge of Man's Future" 1956 and "The Human Future Revisited" 1978.

Audiotape of WE Harris' last lecture for the Chemistry 312 class, April 1962.

16 mm movie projector tape, "Hazardous Waste," a talk given by WE Harris; prepared at the University of Alberta.

"Nikor" cardboard box, contains slides on the topic of Energy.