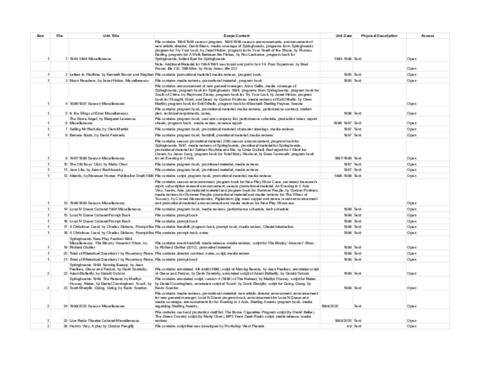 Theatre Network was founded in 1975 by a group including a director, Mark Manson, and six actors: Tanya Ryga, Dennis Robinson, Shay Garner, Jeurgen Beerwald, Jonathan Barker and Gerry Zelinski. All had trained at the University of Alberta Drama Department. The Theatre was not initially an Edmonton company. Rather, the original objective was to produce plays "about Alberta for Albertans", with an overall two-part mandate: to foster the development of original regional theatre, and to promote the arts in Ablerta through the medium of theatre. Unofficially, the aim was to help establish a cultrual network across the province through theatre touring. To achieve these ends the group began developing plays on-site through collective creation, adapting techniques and objectives made popular by Theatre Passe Muraille, under the direction of Paul Thompson. Early productions included Two Miles Off (1975), The Homesteaders (1976), Hard Hats and Stolen Hearts (1977), Kicker (1978) and A Trip to the Farm (later Sarah and Gabriel (1978/79). In addition to the collectives, Theatre Network also produced new works by playwrights such as George Ryga (Seven Hours to Sundown, 1976) and Sharaon Pollock (Tracings, 1977). In 1977-78, Theatre Network toured Hard Hats and Stolen Hearts to eastern Canada. The tour also included a run at Richard Schechner's off-Broadway venue, the Performance Garage, in November 1978u, making Theayre Network the first "Edmonton" professional theatre to have a play produced in New York. Manson resigned as artistic director in 1980, and the theatre re-organized as an Edmonton community-based theatre with its own permanent space, a converted Jehobah's Witness meeting hall at 11847 - 77 Street. The space, rented from the City, provided a small 150 seat theatre. The first "Edmonton" season was directed by Andras Tahn, who served as interim director while on leave from his position as artistic director of Saskatoon's 25th Street Theatre. Theatre Network appointed Stephen Heatley as artistic director (1981). Under Heatley, a graduate of the University of Alberta's Master of Fine Arts in Directing program, the theatre reinterpreted its mandate to feature new work by prairie playwrights in general, though still with a preference for Alberta. Among the playwrights produced were Ken Brown, Kelly Rebar, Robert Clinton, Frank Moher, Lyle Victor Albert, Michael McKinlay, Ian Ferguson and Greg Nelson. Heatley also introduced Dark Mondays, which provided a space for independent artists to stage their works, and Theatresports, an improvisational theatre that eventually evolved into Rapid Fire Theatresports. In 1989, Theatre Network moved to the old Roxy Theatre building on 124th Street and 107 Avenue. The move provided a 300-seat venue as the theatre underwent another transformation, under the slogan "Network for the Nineties." The first production in the Roxy was a co-production with Small Change Theatre: One Beautiful Evening (or Two), November 28, 1989. In its new home, Theatre Network launched the Network Newrites repertory festival for new plays, and developed a project called Canadian Dell Arte, whose play Once Upon a Landfill (1993) essentially concluded Heatley's connection with the company. The move, coupled with a recession and a decline in audience provided unexpected larger expenses as well as a larger venue, resulting in strained budgets and realtionships. In 1992, Heatley resigned when the Board cancelled a scheduled production of Conni Massing's The Aberhart Summer, after contracts had already been signed with the cast. Heatley's successor, Ben Henderson almost became the last to occupy the post of artistic directror. Hired in 1993, Henderson inherited a large debt that only increased. By the end of the 1994 season, the debt had grown to nearly $250,000. Henderson, general manager David Hennessey and a team of volunteers fund-raised the theatre back into solvency, and at the same time renovated and redecorated the building rom floor to ceiling. Henderson's five years at Theatre Network continued the tradition of new works, but also added in productions that originated elsewhere, such as Ronnie Burkett's Tinka's New Dress, in the 1997-98 season. In 1996 Theatre Network initiated the Festival of the Next Generatin, under Bradley moss. In 1997, John Cooper was hired as co-artistic director. Cooper had been artistic director of Phoeniz Theatre when it folded. At the same time, Theatre Network expanded its range of show to include the kind of programming Phoenix had carried on.

The records remained with the creator (workshop West) until transferred to the UA Archives.

The entire Accession is Open and Accessible to Research

Further accruals are likely to be expected.