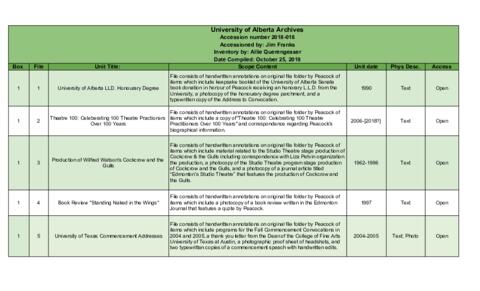 Teacher, Director, Actor – Gordon Bruce Peacock was born in April 1928 in Hanna and grew up in the hamlet of Pibroch in Westlock County Alberta. He began his student days at the University of Alberta in 1945 when he enrolled in an education program. His academic career started at a time when the institution was increasing support to the fine arts. In 1945-46 President Newton endorsed a “tripartite Department of Fine Arts.” The department was divided into “divisions” of music, drama and visual art. Previously the arts were the purview of the Faculty of Extension where Sydney Risk instructed “Dramatics.” Risk became the first head of the Drama division. One of Risk’s first projects was the University Provincial Players (UPP), a touring theatre company that gave performances in small towns across Alberta. Robert Orchard, the first instructor of UofA drama courses, succeeded Risk after a year and continued the UPP tours with Gordon Peacock an enthusiastic member. The 1946 company comprised six actors performing in three separate plays under Orchard’s direction. The tour covered thirty towns concluding with performances at the Banff Centre where Orchard instructed in the summer. Peacock continued in the education program the next three years and his interest in the arts continued to grow. In 1947 Peacock played Feste in the University Drama Society’s production of Twelfth Night, under the Direction of Robert Orchard. By 1949 Peacock’s involvement with student arts groups suggested a future career in the performing arts. He was a member of the UPP (1946-49), a member of the University Drama Club (1945-49), Editor of “On Stage” (1946-47), and President of the Literary Association (1948-49).

In 1950 Peacock pursued graduate studies at the Carnegie Institute of Technology in Pittsburgh. Two years later the institution awarded him a Master of Fine Arts degree in Drama in the “directing option.” With the recommendation of his advisor Henry Boettcher, he returned to Edmonton to look for employment. Although Orchard wished to immediately hire Peacock for the UofA’s newly created Studio Theatre, Peacock initially had to work for the Edmonton Public School Board. Peacock nevertheless directed Studio Theatre’s first production of the season. In 1952 Robert Orchard took a one year sabbatical to study drama in France. In his place Gordon Peacock assumed the responsibilities of lecturer in drama, director of the Drama Division and production manager of the Studio Theatre. The Board of Governors subsequently extended this appointment to August 1955. During this period, Peacock experienced, like Orchard, the need for both a more developed theatre venue than the WWII quonset huts, and a set of senior courses in the drama program because many of the plays contained roles demanding experienced students.

After several years of lobbying by Peacock and other members of the drama division, the General Faculties Council (GFC) agreed to support a degree in drama in the Bachelor of Arts program. In the meantime, Robert Orchard resigned in 1955 to be replaced by Peacock who became head of the Drama Division and director of Studio Theatre. During this period Peacock advanced from Assistant Professor in the Division of Drama (1954-1957) to Associate Professor, Drama Division (1957-1964).He also found time to serve as Chairman and instructor in acting at the Banff School of Fine Arts Summer School (1958-1965) and was the founder and first artistic director of Edmonton’s Torches Outdoor Theatre (1962). Although the GFC approved a BA in drama in 1956-57, the program was not instituted until 1964. In the interim Peacock was forced to make alliances with other arts programs in an effort to share resources. Studio Theatre's 1958 (9th) season was almost cancelled when the WWII quonset huts, Studio Theatre's improvised performance venue, were demolish to make room for Cameron library. Peacock announced they would cancel all public performances for lack of venue. However, the Department found a temporary performance space on a kind offer from Hebert Coutts, Dean of the Department of Education. Studio Theatre and the Drama Department continued operations in a remodelled auditorium and with classroom space in the Education Building (E.A. Corbett Hall) until permanent theatre space was built. Corbett Hall would be Studio Theatre’s “temporary” space solution for the next 30 years. The Drama Department moved out of Corbett Hall in 1989 and it was announced Studio Theatre's new home for the following two years would be the Myer Horowitz stage. Once more, a temporary space became permanent and it was not until 1995 that Studio Theatre moved to its new home in the newly opened Timms Centre. In spite of the resource difficulties, Studio Theatre quickly gained a national reputation for staging daring and innovative indigenous theater. Notable amongst Studio Theatre's productions was "Let's Murder Clytemnestra According to the Principles of Marshall McLuhan," a play by UofA English Professor and McLuhan collaborator Wilfred Watson. The play drew national attention to both the work of Studio Theatre and the creative work of Wilfred Watson. (see Wilfred Watson's records at the UofA archives for further information.

Eventually, the UofA created the Department of Drama in 1964 and Peacock became the founding chairman, a position he held until 1971 when he returned to full-time teaching. As Peacock observed, the UofA Bachelor of Drama program had a tremendous impact on the development and quality of theatre at the UofA. It was also recognized as a path breaking program on the Canadian drama scene. The Department of Drama created the first professional theatre training programs at a Canadian University: the B.F.A. in Acting (1966), the M.F.A. in Directing and in Design (1968) and the M.F.A. in Playwriting (1969). While serving as Chair of Drama at the UofA Peacock was also Guest Instructor and Director of the National Theatre School of Canada, in Montreal, from 1963 to 1966. He also served from 1969 to 1973 as the guest director of summer theatre at the Pacific Conservatory in Santa Maria, California. In 1976 Peacock returned as Drama Department Chair to fill in for Tom Peacock who was taking a study leave. He filled this position until 1985 when he accepted an offer of the position of Frank C. Erwin, Jr. Centennial Professor of Drama, University of Texas, Austin. A position he has held until the present.

Peacock has also worked on other creative projects during his tenure at the UofA. He was guest instructor in Aesthetics and Theatre History at the Banff School of Fine Arts Summer School, (1971-1981), adjunct Professor of Theatre – University of Tennessee, 1987. He served as principal theatre consultant for Mount Royal College Theatre, Calgary; Eric Harvie Theatre, Banff; and Thrust Theatre at the University of Calgary. He also consulted at York University Theatre Department, University of Victoria Theatre Department, and the Banff Centre for the Arts. In this period Peacock also served as editorial advisor to the Canadian Theatre Review, was a member of the Downey Commission on Advanced Education in Fine and Performing Arts in Alberta, and was the first president of the Canadian Theatre Association (1967-1969). In his directing career Peacock directed 40 major productions at Studio Theatre, 4 major productions for the Banff School of Fine Arts, one production for the National Theatre School and another for Theatre du Rideau Vert, both in Montreal. He has also directed 4 major productions for the Pacific Conservatory of the Arts, Santa Maria, Ca. and 2 productions for the National Theatre School, Stratford, Ontario. Peacock lists the following career awards: Canadian Drama Award (1959), The Margo Jones Citation fo New Work (The White House, Washington, D.C., 1964), The Canada Council Artist’s Award (1968), The British Council Research Award (1969), The Edmonton Award for Excellence in the Arts (1971), The Province of Alberta Award for Distinguished Attainment in the Arts (1975), Honorary Doctorate of Laws, University of Alberta, (1990).

Textual material is in relatively good condition.
The watercolour painting is in poor condition with small tears and holes from wear.