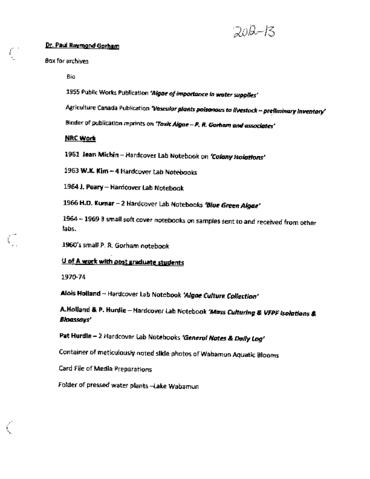 Paul Raymond Gorham, 88, from Fredericton, New Brunswick, Canada, on November 9, 2006. M.S. in botany. He obtained a Ph.D. from the California Institute for Technology in Pasadena, California, and worked for the Department of Agriculture in Ottawa, Ontario, Canada. For the next 24 years he was a research scientist with the National Research Council. He was involved in pioneering studies of photosynthesis. In 1969 he moved to Edmonton, Alberta, and was a professor of botany at the University of Alberta. He served as chair from 1971 until 1979, retiring professor emeritus in 1983. He helped found the Canadian Society of Plant Physiologist, the Canadian Botanical Association, and the International Association for Plant Physiology. He was a driving force behind the creation of the 5-acre Kurimoto Japanese Garden.