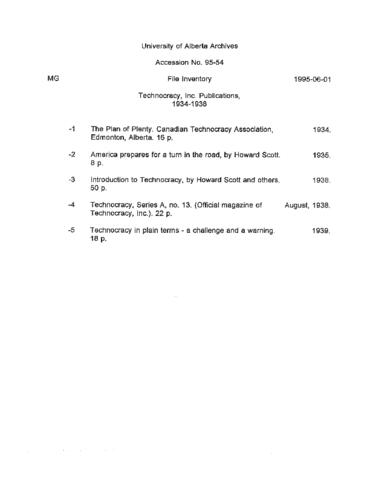 The Technocratic movement was started by Howard Scott, an American engineer, in 1919. In that year, Scott and a number of other scientists and engineers, impressed by American mobilization efforts during the First World War, organized a group known as the Technical Alliance to conduct a survey of the of the potentialities of the American Economy in peacetime. The group was renamed Technocracy in 1930 and in 1932, its basic findings were published. In 1933, Technocracy was incorporated in New York State as a non-profit organization with Howard Scott as its director in chief. The objects of the new organization were: to carry out on a program of economic research; to bring technocratic theory to the attention of the public; and to provide a skeleton organization capable of forming the Technate of North America in the event of a final collapse of the social and economic order based on the price system. From the beginning the movement disavowed revolutionary and political activities. Scott began touring North America and soon chapters were formed in many North American centres including Calgary and Edmonton. The movement gained strength throughout the 1930s but in 1940, due to its stated opposition to the Second World War, was banned in Canada. The ban was lifted in 1943 when Technocracy modified their opposition to the war and sections were re-formed accordingly. However, the post-war years, perhaps due to continued economic prosperity saw membership and interest in Technocracy decrease. Though, relatively insignificant the movement has continued on into the early years of the 21st century.

Cursory search did not locate material.