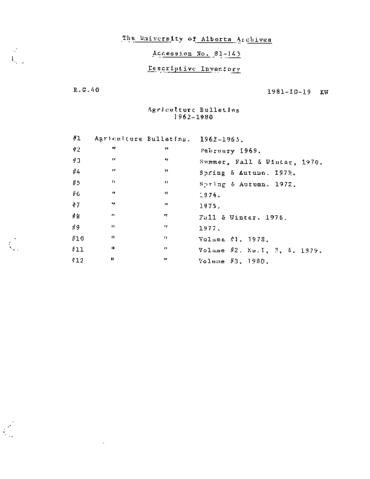 Also in 1915, the Departments of Animal Husbandry, Horticulture, and Field Husbandry were established, where Dean E.A. Howes served as the Department of Horticulture’s first instructor. In 1917, a flock of sheep were introduced to campus, pastured in front of three residence buildings, which served to be the first in-house animal additions the faculty would provide. Just one year later, the first class of 10 students graduated with a B.Sc. in Agriculture. That same year after the war ended, one hundred and ten veterans enrolled in the Faculty. The federal government paid their tuition fees while the university supplied the equipment.
In 1919, the University Stock farm was purchased and the Department of Soils was established with F.A. Wyatt as its first Head. The university would go on to purchase 380 acres in 1920 for $53,000, becoming the location currently known as "South Campus." John McGregor Smith was appointed the first (and only) member of the Department of Agricultural Engineering in 1921. In May of that same year, the Department of Dairying was created with Dr. C.P. Marker appointed as Professor of Dairying and Head of the Department - without a salary from the University. Marker was Alberta's Dairy Commissioner at the time, and being a professor at the fledgling university was considered a part-time side venture.
The Department of Entomology was created in 1922 with E.H. Strickland leading the charge as the first Professor of Entomology, spearheading an effort to control grasshoppers that were threatening to destroy all crops in southern Alberta at the time. The Agricultural Reading Room opened the same year. The Department of Poultry Husbandry was created a few years later (1928) with Miss Helen Milne as its first instructor and only staff member. The land for the Breton Plots research facility was bought and established in 1929 by the Department of Soils. The university would continue its purchases of new land in 1930, acquiring an additional 240 acres west of 122 St. in an area now known as the West 240. Due to these changes, farm buildings were moved from the main campus (where the Northern Alberta Jubilee Auditorium is today) to South Campus. Five farm buildings were put on wheels to be transported out to the farm on South Campus. In 1954, the new Agriculture Building officially opened as another addition to the faculty’s infrastructure.
Robert Newton was appointed as the Dean of Agriculture in 1940. Two years later in 1942, he would be appointed to a new role as the President of the University and serve in that capacity until 1950. Robert Sinclair replaced him in 1942 as the third Dean of Agriculture and the first U of A graduate to obtain the position. This spurred the reorganization of several departments in the 1940’s. The Department of Animal Science was formed in May 1942 by the amalgamation of the Departments of Animal Husbandry, Veterinary Science and Poultry Husbandry. In 1944, the Department of Plant Science was formed by combining the departments of Field Crops and Agriculture, with J.R. Fryer as its first Head.
Government programs would continue to help returning veterans enter universities; enrolment nearly doubled in 1945 following their efforts. The faculty began to branch out and strengthen its identity by creating new social activities for its students. The first Bar None dance was held in 1946. Open to all students from across the university, the dance is the longest running event at the University of Alberta. In 1947, the first Varsity Guest Weekend was hosted by the Faculty of Agriculture, who put on a field day to "give outsiders a picture of faculty activities." The large success of this event prompted the rest of campus to adopt the idea and institute it university-wide in 1951.
The growth of the faculty prompted the need for more new additions. In 1955, Dr. Roy Berg was hired. His research revolutionized the conservative cattle industry. Using cross-breeding, he was able to increase cattle's productivity by 30-40%. In 1961, the Department of Agricultural Economics and Farm Management was created, with Travis Manning as the first Head. The faculty’s reputation continued to grow and so in 1963, the War Supplies Agency recruited Dean Bentley and the Faculty of Agriculture to be a part of Food Coordination in the event of a nuclear emergency.
Coming up to its 50th anniversary in 1965, the faculty saw other institutional changes, such as the Department of Dairying changing its name to the Department of Dairy and Food Science in 1964 and the new Household Economics Building opening the following year. In 1971, the Department of Forest Science was established and the Faculty changed its name to Faculty of Agriculture and Forestry. The Department of Agricultural Economics and Rural Sociology followed suit in 1975 and was renamed the Department of Rural Economy. The Faculty also contributed to many new additions, including the creation of the Devonian Botanic Garden in 1980 and the building of the new Agriculture-Forestry Centre in October, 1981.
Further amalgamations continued into the 1990’s, when the Faculty of Agriculture and Forestry united with the Faculty of Home Economics to become Faculty of Agriculture, Forestry and Home Economics in 1993. In 1994, the Department of Forest Science merged with the Department of Soil Science to form the Department of Renewable Resources. Starting in 2002, the South Campus started to expand even more. The Swine and Research Technology Centre opened that year, as well as the Agri-Food Discovery Place opening on South Campus in 2006.
In 2007, the Faculty would change its name to the moniker we see today, as the Faculty of Agricultural, Life & Environmental Sciences. Research would also see a boom through the purchase of 800 acres from the Bocock family to create the St. Albert Research Station (2008) and a donation of a 12,000-acre ranch from Edwin and Ruth Mattheis which would pave the way for the creation of the Rangeland Research Institute (2010). In 2011, the Department of Rural Economy would also changes its name to the Department of Resource Economics and Environmental Sociology (REES)
The Faculty celebrated its Centennial in 2015, and reported in 2019 that it has approximately 1,600 undergraduate students and approximately 540 graduate students, a significant increase from the small number of 16 students it started out with in 1915.