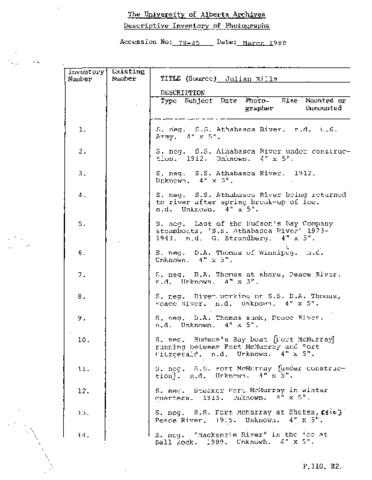 Julian "Hooley" Mills was a steamship captain who, for 45 years, pioneered transportation on Alberta's northern waterways. Julian Mills was born in 1897 in Fort Simpson, Northwest Territories. The Mills name is closely associated with northern river transportation; his father, James William Mills, was a captain of pioneer sternwheelers and builder of boats for the Hudson's Bay Transport. James Mills built the second steamship of the McMurray region, the McMurray. In 1912 Julian Mills first worked on the northern waterways as a deckhand working for his father. After three years of service in World War I, Julian Mills returned to Northern Alberta. In 1921, he started working for the Hudson's Bay Company northern transportation operations. He worked for the Hudson's Bay Company for 20 years, first as an engineer on the Nechimus, then as a captain on the HBC tug Canadusa plying the Athabasca River between Fort McMurray and Lake Athabasca. He married Phyllis Burke in 1927. In 1940 he joined the transportation firm eventually known as the Northern Transportation Company in Fort McMurray. When Eldorado Mining and Refining opened at Beaverlodge, Julian Mills worked aboard the tug Radium Prospector on the Lake Athabasca run to Bushell, the port used to supply the Mine. For twenty-two years Mills made the lake Athabsca crossing. Often he made as many as twenty-four crossings in a short and often stormy season. Northern Alberta communities knew Julian Mills for more than servicing the northern economy with transporation of labour and material supplies. His ships were known as floating libraries loaded with reading material from books to magazines available to borrow. He also delivered and collected such literature from the local northern communities he serviced through their ports. Mills also provided his navigation skills to the RCMP, taking justice officials north to administer Canadian and provincial law and administration. Mills retired in 1962 and moved to Edmonton in 1970. He continued his association with steamships in his retirement as a captain of the Klondike Queen, a deisel-powered paddle wheeler that offered cruises on the North Saskatchewan to Big Island, a recreation park near Edmonton. Mills died of heart failure in Edmonton on August 21, 1980. He was 82 years old.