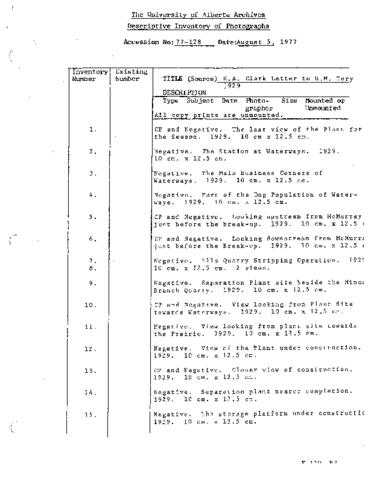 Sidney Martin Blair was born in Parry Sound, Ontario, on December 22, 1897, the youngest of the five children of Frederick and Mary Ann Blair. The family moved to Alberta when he was four years old, settling first at Pine Lake, southeast of Red Deer, and then on land at Dewberry in 1906. Later, he lived with an uncle in the Edmonton area while completing his schooling at Strathcona Collegiate Institute and attending classes in mining engineering at the University of Alberta. From 1917 to 1919 he was a flying instructor with the Royal Air Force, at which time he became associated with Khaki University and subsequently the University of Birmingham, where he received his B.Sc. in Mining in 1922. On his return to Alberta he registered as a graduate student at the University of Alberta, centering his attention on the oil sands at Fort McMurray and working both in the laboratory and in the field under the guidance of Karl A. Clark. His thesis for his Master of Science degree, "An Investigation of the Bitumen Constituent of the Bituminous Sands of Northern Alberta," was accepted in 1924, after which he was a research engineer with the Scientific and Industrial Research Council of Alberta. In 1926 Blair joined the Universal Oil Products Company's laboratories in Chicago to take part in oil cracking research, and then started his work with a company known as Trinidad Leaseholds Limited as Development Manager of the asphalt refinery. Following his marriage in 1927 to Janet Russell Gentleman, and after the birth of his children Sidney Robert, and Mona Helen, family homes were established at various times in Trinidad, England, the United States and Canada. From the outbreak of World War II until 1947, he was involved with the construction of refineries capable of producing high octane aviation fuel for the British Air Ministry, a top secret war project carried out in Trinidad. Returning to Canada in 1949, he bought a house near Bolton, Ontario, and at the same time, as an engineering consultant and Vice-President of Canadian Bechtel Limited, he began his long association with the Bechtel Corporation. In the ensuing years he was involved in the planning and construction of oil refineries and chemical factories, numerous pipeline systems. Although he officially retired as President of Canadian Bechtel Limited in January 1974, he continued to act in an advisory capacity to the Company on special assignments in Canada. At the request of the Government of Alberta, he prepared the Report on the Alberta Bituminous Sands at the First Oil Sands Conference held in Edmonton in September 1951. The "Blair Report", as it came to be known, was based on his own early studies in oil sands and on scientific, technical and economic advice garnered from a number of other scientists noted for their expertise in their particular fields. He was a member of the Professional Engineers of Alberta, British Columbia, Ontario, and Quebec, and the Petroleum Institute of Canada, as well as numerous American and British associations. He held directorships not only within the Bechtel Corporation, but also with the Canadian Nuclear Association, Newfoundland Oceans Research and Development Corporation, natural gas and insurance companies, and a mortgage and trust company. Throughout his career he was the recipient of many awards, the most outstanding being: the honorary degrees he received from Memorial University, Newfoundland, the University of Alberta, and the University of Waterloo; the Professional Engineers Gold Medal from the Association of Professional Engineers of the Province of Ontario; the Canadian Silver Jubilee certificate and medal for meritorious service. His first wife, Janet (Nettie), died in January 1974, and in 1979 Dr. Blair married Dr. Margaret Milton, a Toronto coroner. They continued to live at Cedar Mains until he was struck by a car and killed on the night of February 13, 1981

Photographs of oilsands pilot plant, as sent by K.A. Clark to H.M. Tory.