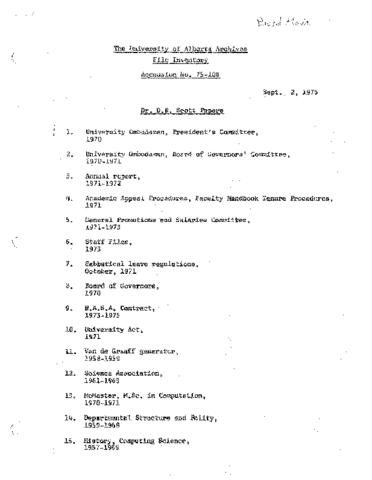 Physicist, Ombudsman, Administrator, [1913]-1975. Dr. Scott came to the University of Alberta in 1940, after receiving a PhD in physics from McGill. He became a full professor in 1954 and head of the Physics Department in 1959. As a member of the President's Committee on Electronic Equipment, he helped bring the first computer to the University in 1957. He was the Director of the Computing Centre from 1961 to 1971 and the Chair of the Computing Department from 1964 to 1971. He was a founder and first Chair of the Academic Welfare Committee and President of the Association of Academic Staff of the University of Alberta (AASUA) from 1961 to 1962. He was appointed as the first full-time Ombudsman of the University in 1971, a position he held until his death.

Accession consists of records pertaining to Dr.Donald Scott including correspondence, notes, and speeches.