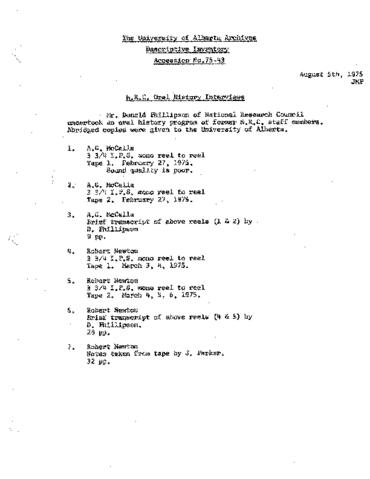 The National Research Council (NRC) is a Canadian government organization responsible for national research and technology. The Minister of Innovation, Science, and Economic Development is responsible for overseeing the NRC. The NRC was formed in 1916 due to pressures arising from World War I. During World War II, the NRC became a military and science research organization investigating chemical and germ warfare agents, radar, the proximity fuse, and cryptology. Following World War II, NRC returned to former duties and many of the projects became new organizations such as the Defense Research Board, Canadian Patents and Development Limited, Atomic Energy of Canada Limited, and the Medical Research Council of Canada (in the 1950s). In 1978, the NRC’s university research funding in natural sciences passed on to the Natural Sciences and Engineering Research Council of Canada. During the 1980s, following governmental budget cuts, financial cuts were made to the NRC’s staff and programming. However, the NRC worked hard to recover.