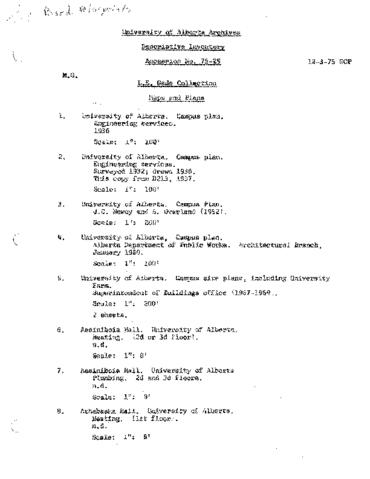 Civil engineer, Administrator, 1907-1974. Leonard Gads was born in Russia in 1907; in 1926 he emigrated to Canada via Manchuria, China and Japan. He received his BSc in civil engineering from the University of Alberta in 1939 and joined the University staff that year. From 1942 to 1945 he served with the Royal Canadian Air Force and as interpreter for the British governors on the Control Commission for Germany, returning to the University in 1946 as an assistant professor. He was named full professor in 1956 and acted as Associate Dean of Engineering from 1959 until his retirement in 1971. He was appointed Professor Emeritus in 1972. Dr. Gads made several return visits to the Soviet Union after his retirement.

Collection of maps and plans for campus, residences and Engineering Building