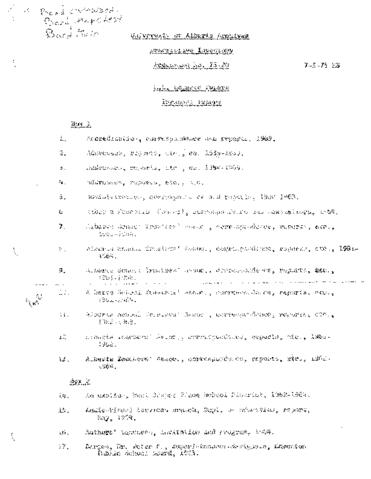 Educator, Administrator, 1885-1975. Milton E. LaZerte worked as a teacher, principal and school inspector in Alberta before joining the University as a lecturer in the Department of Philosophy, Psychology and Education (1924-1933). Upon the creation of the School of Education in 1929, he was appointed associate professor and Director of the School. He headed the School under its reorganizations as a College (1943) and Faculty (1945), and was named Professor Emeritus upon his retirement as Dean in 1950. He continued to be active in the educational field, as Dean of Education at the University of Winnipeg from 1955 to 1958, and in his work for numerous professional associations. In addition, he held office on Edmonton's City Council (1960-1962) and Public School Board (1962-1971).

Correspondence, reports and other materials