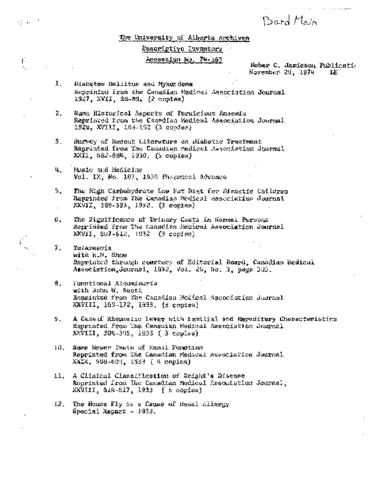 Heber Jamieson was born in Almonte, Ontario, and received his medical degree from the University of Toronto in 1901. Post graduate work was carried out at the University of London, England, where he became a Member of the Royal College of Surgeons and a Licentiate of the Royal College of Physicians. He came to Edmonton in 1911 to join the staff of the Provincial Laboratory, and with the establishment of the Faculty of Medicine at the University in the fall of 1913, he became a part-time instructor in basic medical sciences. In 1914, when Dr. A. C. Rankin, the newly appointed Provinicial Bacteriologist and Director of the Provincial Laboratory, left on military service overseas, Dr. Jamieson assumed his duties on a temporary basis for the next five years. Appointed Lecturer in Medicine in 1920 and Associate Professor two years later, he was made Professor of the History of Medicine in 1925. In addition to his Univesity lectures and clinics, Dr. Jamieson conducted a private practice in internal medicine where his specialized treatment of diabetic patients gained recognition not only for the excellent results obtained, but also because the methods used were far in advance of the times. In 1943 he was promoted to the rank of Professor of Clinical Medicine and although he retired from the University on October 5, 1946, his long association with the institution was continued in his being named Honorary Professor of that department. He retired from private practice in 1950 and died in Edmonton on February 20, 1962. Heber Jamieson married Florence Lyon of the Ottawa Valley region before World War One and they had two daughters. During his career Dr. Jamieson wrote one book, Early Medicine in Alberta, The First Seventy-Five Years, and numerous articles that were originally prepared for presentation at medical meetings but were later published in provincial or national journals. Their theme is the development of medical facilities within the province, with special emphasis on doctors who were in the area before 1910, and on early hospitals and nursing care.