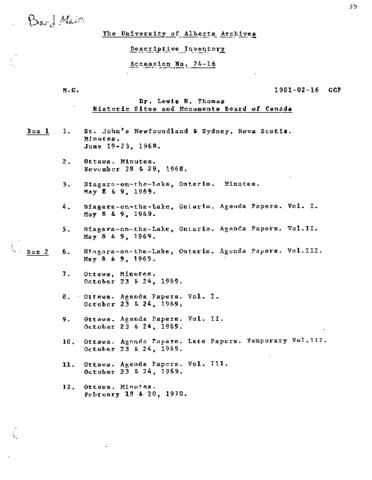 Lewis Herbert Thomas was born April 13, 1917, in Saskatoon, Saskatchewan. The son of Reverend Robert and Margaret Thomas, he received his elementary education in Nova Scotia, and took his high school at Nutana Collegiate, Saskatoon. He entered the University of Saskatchewan and graduated in 1940 with high honors in history and economics (BA). In 1941, he completed his MA thesis, "Constitutional Development of the North-West Territories, 1870-1888". In 1946, he married Margaret E. Telford, and they had two children, Jean and Robert. Following a period of research employment in the Department of History, University of Saskatchewan, he was appointed in 1946 Assistant Provincial Archivist for the Province of Saskatchewan. During this time he also lectured in history at Regina College. In 1948, he was appointed Provincial Archivist of Saskatchewan, a position which he held until 1957. His work with the Saskatchewan Archives Board involved drafting the first archival legislation for the Province of Saskatchewan, and establishing the policies and procedures governing the two provincial archives offices in Regina and Saskatoon. It was in this period of time that Dr. Thomas completed his doctoral studies under Professor A.L. Burt at the University of Minnesota (1953). His thesis was later published as The Struggle for Responsible Government in the North-West Territories, 1870-97, and became a classic reference for this period of government development in Western Canada. Between 1957 and 1964 Dr. Thomas served as Associate Professor of History at the Regina campus. His history, The University of Saskatchewan, 1909-1959, was complemented by a number of articles related to archival development in Canada; exploration; and Saskatchewan history. In 1964, Dr. Thomas joined the Department of History at the University of Alberta in Edmonton. Recognized as Professor of History in 1965, he also became departmental chairman, 1965-1968. In 1975, his The Renaissance of Canadian History: A biography of A.L. Burt was published. During his career, Dr. Thomas contributed six scholarly books, and numerous articles to the understanding of Canada's past. As editor of Saskatchewan History, 1949-1957, he established an outstanding journal of regional history. In 1968 he was appointed to a three-year term as Alberta's representative on the National Historic Sites and Monuments Board of Canada. This appointment was renewed for five years in 1971. His leadership in the profession and in linking the world of scholarship to the Canadian public was recognized on many occasions. In 1972, the University of Saskatchewan awarded Dr. Thomas an honorary doctorate of laws, which was followed by the American Association for State and Local History's Award of Merit. In 1975, he received, "for outstanding contribution to Alberta history", the award of the Historical Society of Alberta. During the Learned Societies Conference in Saskatoon, June 1979, the Saskatchewan Archives Board honored Dr. Thomas at a special dinner. Following the dinner, the Canadian Historical Association made him an honorary life member. In 1982, Dr. Thomas was also awarded honorary life membership in the Archives Society of Alberta, and in October of 1982, he received the Order of Canada. Upon his retirement from the University of Alberta in 1982, Dr. Thomas donated his papers to the University's archives. Post-retirement activity saw Dr. Thomas research and prepare for publication, studies on socialism in Western Canada. A book about William Aberhart and Social Credit in Alberta was published in 1977, and his last completed project was editing tape transcripts resulting in the publishing of: The Making of a Socialist, The Recollections of T.C. Douglas in 1982. Dr. and Mrs., Thomas retired to Regina, Saskatchewan, and Dr. Thomas died there on November 17, 1982.

Historic Sites and Monuments Board of Canada - meeting minutes