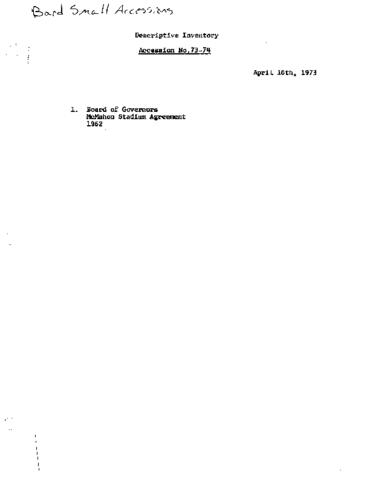 The Board of Governors is a corporation which consists of a Chair appointed by the Lieutenant-Governor in Council, the Chancellor, the President, and persons appointed by the Lieutenant-Governor in Council, who include representatives from the Alumni Association, the Senate, the academic and non-academic staff, undergraduate and graduate students, and the general public. The conduct, management, and control of the University and all its property, revenue, business, and affairs are vested in the Board. The Board appoints the deans of all faculties, all members of the teaching staff, the Librarian, the Registrar, and all members of the administrative staff, but no one may be appointed to a senior administrative post or to the academic staff of the University unless first nominated by the President of the University. The Board provides for the maintenance of buildings and the erection of new buildings. It has authority to purchase and acquire property. It fixes the fees charged for courses and it makes financial provision for the establishment of new faculties, departments, and courses. It may establish extension programs to contribute to the educational and cultural advancement of the people of Alberta. When any question arises as to the powers or duties of the Senate, any other University body, the President, a dean, or any other officer or employee, and these powers and duties are not definitely provided for in the Universities Act, the Board's decision on the question is final (Calendar, 1990/91). The Board was created by the University Act (1910) which was modelled on the Ontario statute which created the University of Toronto. Chairs: 1911-1917 Edwin Charles Pardee; 1917-1940 Horace Harvey; 1940-1950 Harold Hayward Parlee; 1950-1966 Charles Malcolm Macleod; 1966-1972 John Edward Bradley; 1972-1975 Fred T. Jenne; 1975-1978 Eric A. Geddes; 1978-1990 John Schlosser; 1990- Stanley A. Milner. Executive Directors: 1911-1968 University Bursar; 1968-[1979] John Nicol; 1979-1984 Brian J. Silzer; 1984- Paul Robison.