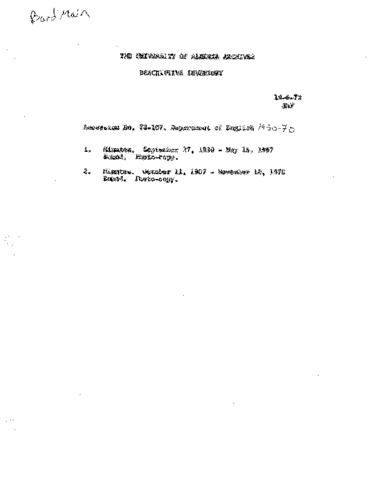 The Department of English was one of the four original departments established in 1908. Its first professor, Edmund Kemper Broadus, was faced with the task of setting the standard and program for entering students. From the start, the Department had the important service function of training students of every faculty to write, and of giving them an acquaintance with literature. The Department offers a broad range of courses in literature and language, and offers specialization in the areas of Canadian literature (especially prairie fiction), and creative writing. The English honours program is the largest in the Faculty of Arts. Heads: 1908-1936 Edmund Kemper Broadus; 1936-1950 Robert Kay Gordon; 1950-1953 Frederick Millet Salter; 1953-1961 John Thomas Jones; 1961-1967 Henry Kreisel. Chairs: 1968-1971 R. George Baldwin; 1971-1976 Edward Rose; 1976-1981 Roland Anderson; 1981-1986 David Jackel; 1986-1989 Linda Woodbridge; 1989-1992 Maurice Roger Legris.