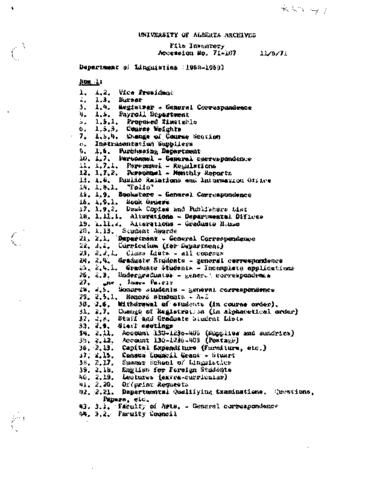 In 1964, the Department of Modern Languages was split into three separate departments, one of which was the Department of Germanic Languages and General Linguistics. A Division of Linguistics was formed in 1968, and a year later it became a department within the Faculty of Science. In 1987 it was placed under the Faculty of Arts. As a teaching and research department, it is concerned with the experimental testing of formal linguistic models and the propositions of general linguistics theory, and with the theoretical problems introduced by such experimental studies. Heads: 1964-1969 Ernest Reinhold. Chairs: 1969-1976 Christopher I.J. Stuart; 1976-1977 Gary Prideaux; 1977-1987 Gary Prideaux; 1987-1990 Lois Stanford; 1990- John T. Hogan.