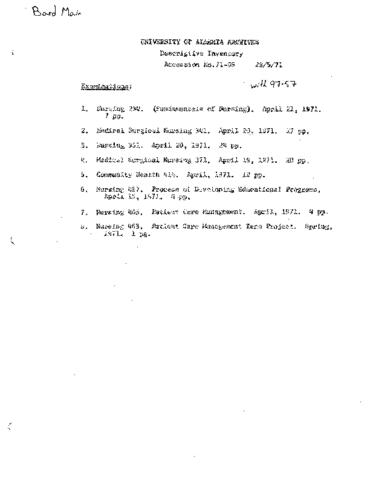 Nursing courses at the University of Alberta were supported by the Canadian Red Cross from 1918 to 1923. The School of Nursing was officially established within the Faculty of Medicine in September, 1923 and the first four baccalaureate students (BScN) graduated in 1928. The clinical portion of the course was offered by the University of Alberta Hospital School of Nursing until 1966. Following the passage of the Universities Act in that year, the School of Nursing became an autonomous academic unit within the University. The four-year integrated Baccalaureate in Nursing program was implemented at this time. The School of Nursing received Faculty status in 1976. Graduate degrees have been available since 1975. Off-campus and collaborative programs with the community and junior colleges of Alberta have been developed, and the merger of the University of Alberta Hospitals School of Nursing and the Faculty of Nursing will take place in the fall term, 1991/92. The goal of the Faculty is to be a centre of excellence in Nursing for the advancement, dissemination and application of nursing knowledge through teaching, research and public service. Directors: 1937-1940 Agnes Jean MacLeod; 1940-1943 Helen Griffith McArthur; 1943-1946 Madeline McCulla Larson (Acting); 1946-1956 Helen E.M. Penhale; 1957-1975 Ruth Elizabeth McClure. Deans: 1976 Ruth Elizabeth McClure; 1976-1980 Amy Elliott Zelmer; 1980-[1982] Peggy-Anne Field; 1982-1987 Janetta MacPhail; 1987- Marilyn J. Wood.