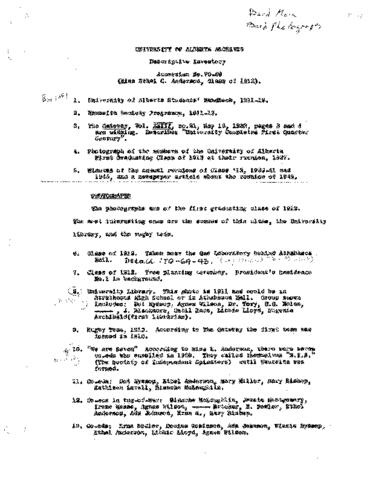 Teacher, 1890-1982. Ethel C. Anderson was one of seven women who enrolled at the University of Alberta when it first opened in 1908. They called themselves the SIS (Society of Independent Spinsters), which became the Wauneita Club in the following year. Miss Anderson was student head of the women's athletics program before she graduated in 1912 as a member of the University's first graduating class. She subsequently received her teaching certificate in Calgary and taught in Edson and Edmonton, where she retired in 1953.

Accession consists of photographs, handbooks, minutes and other materials from the Class of 1912.