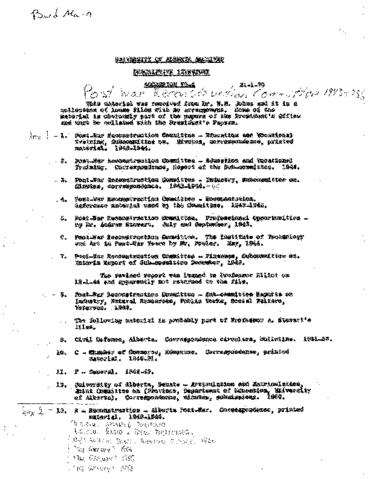 The Post-War Reconstruction Committee was established in 1943 by an Act of the Government of Alberta (Statutes of Alberta, Chapter 8). Its purpose was to study how the province could make the transition from a wartime to a peacetime economy and re-absorb the population absent from the economy during World War II. The general committee was chaired by Nathan Eldon Tanner and (after September 1944) Alfred John Hooke, Members of the Legislative Assembly. Robert Newton, President of the University of Alberta, was a Committee member and chair of the Subcommittee on Education and Vocational Training. The Committee and its subcommittees issued their final reports in March 1945, and subsequently the Post-War Reconstruction Act was repealed and the Committee dissolved.