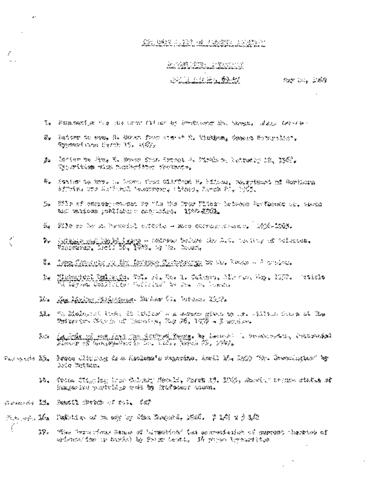 Zoologist, Ornithologist, 1891-1957. Swiss-born ornithologist and naturalist William Rowan immigrated to Canada in 1919; in 1920 he became the first professor of the Department of Zoology, which he headed until his retirement in 1956. He pioneered research into avian migration patterns and studied the cyclical population fluctuations of birds and mammals through banding studies. Dr. Rowan was a strong proponent of wildlife conservation and active in fish and game associations. He was also an artist whose works were exhibited in Canada and England. His drawing of a whooping crane was selected for the design of a Canadian postage stamp.

Reta Guenever Mary Bush, daughter of A.R. Bush, was living in the family home in Morden, Surrey, England, at the time of her marriage to scientist William Rowan, in September 1919. That year they emigrated to Canada where her husband lectured in zoology at the Univeristy of Manitoba for one year, before moving farther west to found and become Head of the Department of Zoology at the University of Alberta. In Edmonton Reta Rowan raised her family of two sons and three daughters and participated in numerous University and community activities for more thatn fifty years. In 1977 she moved to Willowdale, Ontario. Mrs. Rowan died in Toronto on Juen 28, 1983. Mrs. Rowan's interests were varied, ranging from involvement with cultural groups such as the Folk Festival Committee and the Allied Arts Council, to association with the Alberta Adult Education Society and with the Women's International League for Peace and Freedom. It was, however, her work with minority groups at the civic and provincial level that claimed most of her time between 1942 and 1967. She organized the female representatives of nineteen ethnic groups in the city into the Council for Canadian Unity, which she chaired from 1942-1950. When the Council's Committee of the Friends of Indians was formed in 1944 she acccepted the duties of corresponding secretary. Although she resigned this executive position in 1960, she remained a member until 1967 when the Society, acting on a motion from Mrs. Rowan, disbanded and transferred its support to the Indian-Eskimo Association and the Canadian Native Friendship Centre. Through the Friends of the Indians Society she came in contact with the Indian Association of Alberta whose progress she followed as an observer or delegate until 1957 when she was appointed to its advisory board.