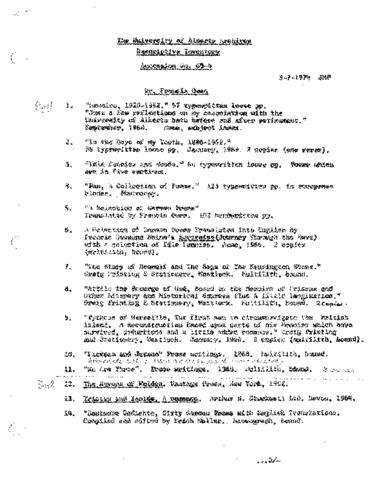 German scholar, Author, 1886-1975. Francis Owen joined the University in 1920 as a lecturer in German; he was made a full professor in 1934. He served as head of the Department of Modern Languages from 1947 until his retirement as Professor Emeritus in 1952. Dr. Owen was particularly interested in philology and the origin of the Germanic language from the Indoeuropean stock; he wrote The Germanic People (1960) on the latter topic, as well as two novels, The Ravens of Woldan and Tristan and Isolde. During the war, 1939-1945, he served as Training Officer of the Canadian Officers' Training Corps (COTC) on campus, and Officer-in-Command, 1945-1947.