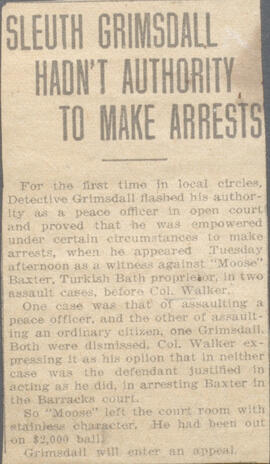 Two newspaper clippings with no identifying newspaper name or date.

The first newspaper clipping headline reads: “Maximum Fine in Reid Case / Pleaded Guilty of Illegal Liquor Selling and Was Fined $500 / Moose Baxter Case was Adjourned / Accused Claimed That He Was Not Proprietor of Turkish Baths”

Bert Reid, proprietor of the Cafeteria, pled guilty before Superintendent Deane of the Royal North West Mounted Police to selling liquor illegally with the understanding that the additional barrel of beer and wine discovered outside did belong to his brother, John, who had the liquor on hand for a planned housewarming party. This version of events was contested by Stanley Jones of the Moral Reform league.

A preliminary to the trial of Moose Baxter was held following the Reid case. Moose Baxter claimed that he was managing the Turkish bath house which the police raided, but that it was his brother Hector Baxter who actually owned the business. The rest of the article is not included.

Detective Grimsdall arrested “Moose” Baxter in two assault cases, but both cases were dismissed by Col. Walker who said that in neither case did Grimsdall have the authority to arrest Baxter in the Barracks court.