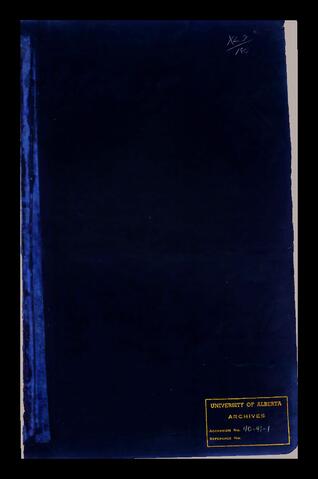 The Alberta University Act, 1906, created the Senate as the governing body of the University of Alberta. Its first meeting, in March 1908, set the policy for the opening of the University in September of that year. The original mandate of the Senate addressed all academic activities of the University, and was originally responsible for interpreting the University to the public, administering faculty councils, and addressing the activities of all academic staff. In 1910 the Act was rewritten, giving administrative powers to the Board of Governors and academic powers to the Senate. A further revision in 1942 assigned academic authority to the General Faculties Council and brought the Senate’s duties and powers closer to what they are today under the provisions of the Universities Act of 1976: “It is the duty of the senate to inquire into any matter that might tend to enhance the usefulness of the university.” The responsibilities of the current Senate involve communication and public outreach; it seeks to stimulate discussion on issues of concern and to aid in their resolution, and acts as a bridge between the University and the public. (From the Past to the Future, pp 7) The Senate, chaired by the Chancellor of the University, comprises 62 members which include: 30 elected members of the public representing affiliated colleges or institutions, geographical areas and groups, and organizations with an interest in the University; 9 members of the public appointed by the Minister of Advanced Education; 2 members of the non-academic staff, appointed by the Minister of Advance Education; 2 appointees from the Board of Governors; 3 appointees from the General Faculties Council; 2 appointees from the Deans’ Council; 2 appointees from the Alumni Association; 4 students appointed by the Students’ Union; 1 student appointed by the Graduate Students’ Association; and 7 ex officio members (including the presidents of the University and the Alumni Association). Formal meetings of the Senate are half-day long and are usually held four times a year, under the chairmanship of the Chancellor. The Chancellor, who confers all degrees, is the titular head of the University and represents the public interest in the University. These meetings, open to the public, are used to “provide Albertans with information on matters of interest or current concern in post-secondary education” (Senate brochure). It is the mandate of the Senate to communicate the needs and views of Albertans to the University and the Alberta government, and to interpret to the public the many facets of the University. The Senate has the power to require a report from any part of the University, and may receive submissions from any member of the public. Ad hoc committees may be set up to consider specific issues, or a task force may be formed to investigate an educational matter brought to Senate’s attention. Subsequently, the Senate will present a report with recommendations, and establish follow-up committees to consider how the recommendations are being implemented. The current Senate has five standing committees: Executive; Nominating; Honorary Degrees; Community Relations; and one to allocate the Emil Skarin Fund. The work of the Senate is coordinated by and executive officer and support staff. The Senate has the power to confer honorary degrees, and in this way is able to recognize in a distinctive way the contributions that Albertans and others have made to life and learning. The Senate is also involved in seeking financial support for projects closely associated with its role.