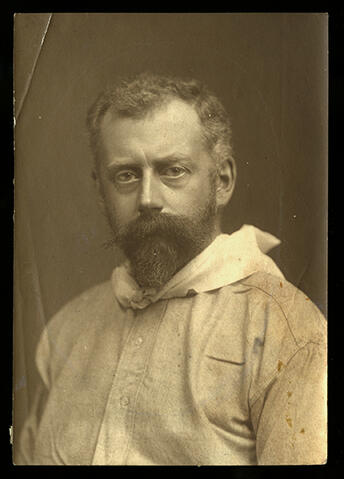 2.0 m of textual and other material.

Henry Roger Ashewell Pocock was born November 9, 1865 at Cookham, Berkshire, England. He came to Canada with his father in 1882, and settled in Brockville, Ontario. In 1882 and 1883, he attended the Guelph Agricultural College, and subsequently took a job as a surveyor for the Canadian Pacific Railway.

Pocock enlisted with the North-West Mounted Police at Fort Osborne in 1884. When the North West Rebellion broke out, Pocock marched with Colonel Irvine's relief force from Regina to Prince Albert in the winter weather, freezing his feet during the trek. As a result of the advanced frostbite to his feet, Pocock had to have several toes amputated, rendering him an invalid constable. He kept a diary/scrapbook for each year he was with the N.W.M.P., and later used the collections to write and publish a series of fictional books based on his experiences, the first successful of which was a biographical work titled "Following the Frontier" (N.Y., 1903) also published as "A Frontiersman" (London, 1903). According to Watters (A Check List of Canadian Literature, 1628-1950), Pocock published at least 15 titles between 1888 and 1931. In 1905, Pocock went on to found "The Legion of Frontiersmen of the Commonwealth." He died November 12, 1941.

Records are in good condition. Some have minor damage, including discoloration, tears, and folds.

The Roger Pocock Archive was acquired in 2008 as a part of the Sir Samuel Steele Collection.

The archive is arranged into three series: Personal Papers, Published/Printed Materials, and Photographs and Postcards.

All researchers (including students, faculty, visiting scholars, and members of the general public) must submit a Retrieval Request Form at least 24 hours before their visit to Bruce Peel Special Collections in order to be sure that library materials have been retrieved from storage and are available for their use.

No further accruals are expected.

Descriptions based on contents of collection and documentation created by former Bruce Peel Special Collections staff.