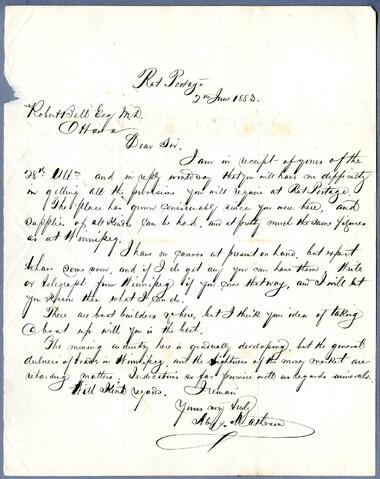 Robert Bell (1841-1917) was a scientist, professor, civil servant, and Acting Director for the Geological Survey of Canada (GSC), who, most notably, named over 3,000 geographical features in Canada. Dr Bell earned a civil engineering degree from McGill University in 1861, and later, while working working for the GSC, earned a medical degree from McGill University in 1878. Between the years of 1863 and1867, Bell was a chemistry and natural sciences professor at Queen's College, now Queen's University, but continued to do fieldwork for the GSC during the summers, as he had done since 1856. In 1867, he began to work full time for the GSC and became its Acting Director in 1901. Altogether, Bell worked for the GSC for 52 years until his retirement in 1908.
More information on Robert Bell can be found in the Dictionary of Canadian Biography.

Good condition. Some items have mild to moderate damage and discolouration along edges and folds.

Purchased by Bruce Peel Special Collections from Aquila Books in two tranches (2016 and 2017).
The collection was originally put on the market by the Bell estate.

The items are housed in the University of Alberta's Bruce Peel Special Collections. Material is available for use by students, staff, and the general public in the library’s supervised reading room upon presentation of valid photo identification (e.g., ONEcard, driver’s license, passport, or citizenship card with photo).
All researchers (including students, faculty, visiting scholars, and members of the general public) must submit a Retrieval Request Form at least 24 hours before their visit to Bruce Peel Special Collections in order to be sure that library materials have been retrieved from storage and are available for their use.

William Edmond Logan was the first director of the Geological Survey, appointed in 1842. The spring of the same year he established the Survey's headquarters in Montreal. More information on the Survey can be found in the Canadian Encyclopedia.