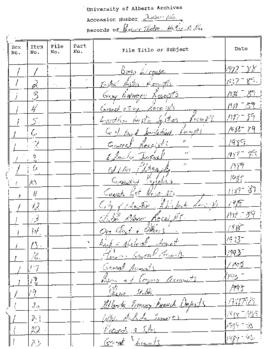 Phoenix Theatre was founded in 1981 under artistic director Keith Digby. Digby had been director of the recently bankrupt Theatre 3, and the legend is that Phoenix Theatre rose from the ashes of that company. Along with an aesthetic relationship with Theatre 3, in terms of the programming of contemporary plays, Phoenix also inherited the offices and telephone number of Theatre 3. Consequently, in its early days one of its main challenges was to clarify its own identity as a separate theatre in order to secure Canada Council and Alberta Culture grants. Phoenix performed its first season in the Student Union Building (SUB) on the University of Alberta campus. The company proclaimed its five-point program in its first year: contemporary works of a more challenging variety than found in most regional theatres; premiers and new Canadian plays; workshop productions of upcoming plays; new looks at classics; a Christmas family show. Digby resigned early in 1982 to become artistic director of the Bastion Theatre in Victoria. He was succeeded by Bob Baker, a University of Alberta drama graduate with experience at Vancouverâ€™s New Play Centre and the Stratford Festival. Baker enhanced the contemporary focus by mounting the latest works of Sam Shepard, David Mamet, Christopher Durang, David Hare, Carol Churchill and Jim Cartwright, Stewart Lemoine and Tom Wood. In these years Phoenix became well loved for its inventive fund-raising events organized by the Friends of Phoenix. Baker also sought out a new home for the Phoenix. The 1982-83 season went up in the John L. Haar Theatre in the Jasper Place campus of Grant MacWEwan Community College. The 1983-84 season saw the Phoenix perform its subscription season out of the 200-seat Walter Kaasa Theatre in the Northern Alberta Jubilee Auditorium, a space it would occupy for the next twelve years. In 1983-84 the Phoenix also moved its offices and rehearsal space to the 4th Floor, 10170 â€“ 100 A st., and initiated its Phoenix Downtown program of new and experimental works. A final move in 1986 took the Phoenix to 9638 â€“ 101 A Ave, with offices and a 100-120 seat alternative playhouse. Jim Guedo succeeded Baker in 1987. Guedo, a University of Saskatchewan Drama graduate, had founded the Actors Lab in Saskatoon before coming to the Phoenix. Under Guedo the emphasis shifted slightly to emphasize â€œcontemporary controversialâ€ theatre in the main season. New Canadian work was largely shifted to the Downtown venue, though existing Canadian works continued to be features in the main stage season. The Downtown venue closed after 1993 as government funding sources for the seed program dried up, and the City, which owned the space, began to look for higher rents. The Phoenix eventually moved its offices to the Arts Barns in 1996, renting space from Fringe Theatre Adventures and performing out of a variety of venues. In 1990, Guedo programmed Our Countryâ€™s Good, the first of a series of annual large-cast productions that would include Les Liaisons Dangereuses (1991), Mad Forest (1993) and Sweeney Todd (1994). This last, for example, was budgeted for a $60 - $70,000 loss at the box office. Board-driven fundraising was to make up the deficits in the Phoenix budgets, but it never kept pace with the actual costs of this ambitious program. By the Time Guedo resigned as artistic director in 1995, the Phoenix had won some 35 Sterling Awards, but was also over $90,000 in debt, and the 1995-96 season was marked by embarrassing cancellations and cost-cutting program changes. John Cooper arrived from Vancouver in January 1996 to take over as artistic director. He programmed a sixteenth season, and mounted a production of Angels in America, Part I: The Millennium Approaches (cancelled in the previous season). Although the production, staged at the Timms Centre for Performing Arts in October and November, was a success, the Phoenix was by this time some $147,000 in debt, and the Board decided to close down operations. Cooper was hired in May 1997 as co-director of Theatre Network, as that theatre shifted itrs program to augment its traditional program of new Canadian works with the kind of contemporary and controversial play that had been the Phoenix mainstay.