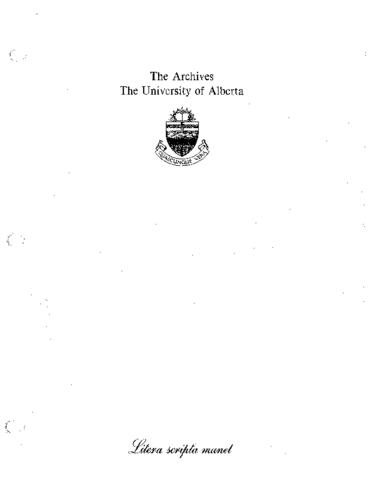 The University of Alberta has always been conscious of its historical role as the first university of the province. Its first recognition of the importance of its archival record was in 1951 with the construction of the new Rutherford Library where provision was made for an archives storage room. However, it was not until 1962 that a University Archives Committee was established. The space needs for an archives were documented in the Brooke Report of the Campus Planning Committee in 1965.

In 1967 the General Faculties Council recommended and the Board of Governors approved the creation of the position of University Archivist. In that year, as a pilot project, records of the office of President Henry Marshall Tory were arranged and described.

The following year James McPherson Parker was appointed the first University Archivist and space was provided in the Rutherford Library for the Archives. One of the first tasks of the new Archivist was to develop the Archives policy which was approved by the Board of Governors in 1969. The policy defined archival records and identified a role for the Archives in the acquisition of the University's permanently valuable records, those of University-sponsored student and faculty associations, and those of teaching and administrative staff. The policy included audio-visual materials in its definition of archives. It defined deposit rules and the role of the University Archives in the disposition of University records.

Armed with this policy, the Archives undertook a records survey in 1970 and submitted a document retention and disposal policy which was approved by the Board of Governors in 1974. This policy defined University documents and classes of records which were to be transferred to the Archives and set broad retention periods for active records. It indicated those records which could be deposited of. It established transfer procedures for archival records and established a procedure for the control and disposal of University documents. It confirmed the 25-year access rule. In that year an Assistant Archivist joined the Executive Secretary (position established in 1969) and the Archives Assistant (1970) in completing the staff complement of four persons.

The Archives became an independent department in 1975 and the following year the Archives and Documents Committee established a sub-committee for Documents Retention and Disposal (DRAD) to establish disposition schedules and to authorize the destruction of University documents. DRAD worked with the University Archivist in compiling a general documents inventory and a General Documents Schedule for administrative records. This latter manual was issued in 1985.

In 1986 the Archives became a unit within a new Department of University Archives and Collections, with Jim Parker as Director. Shortly after the appointment of Bryan Corbett as Chief Archivist in 1987 the Archives began work on a Subject Classification Guide for the Records of the University of Alberta. This guide, designed as a tool to assist departments in developing filing systems, was drafted by 1989.

Native Sources at the University of Alberta Archives Subject Guide