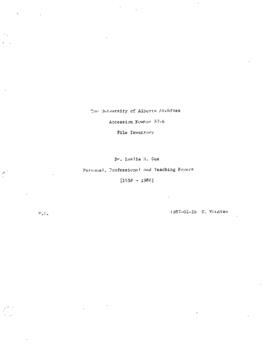 Educator, 1918-1986. Dr. Gue taught educational administration at the University from 1966 to 1984, becoming a full professor in 1974. He was involved in native, intercultural and international cooperative education programs. He developed an interest in native education while superintendent of the Alberta Northlands School Division from 1961 to 1964, and at the University he served as an advisor to the Morningstar Project. From 1966 to 1986 he was Director of the Thailand Comprehensive School Project. Co- sponsored by the University, the Canadian International Development Agency, and the Governments of Canada and Thailand, this project successfully helped to improve education programs in Thailand.

Fonds consists of records pertaining to Leslie Gue and his work as an educator.