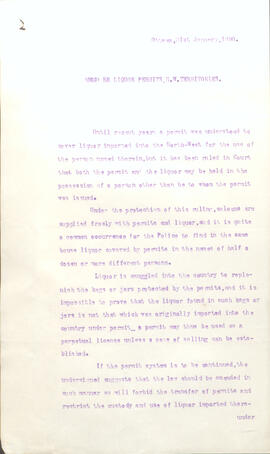 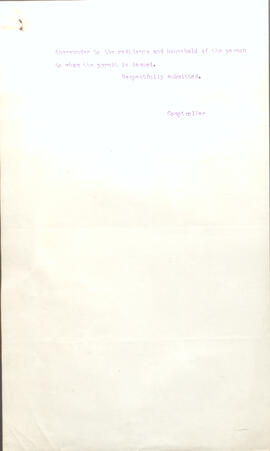 “Until recent years a permit was understood to cover liquor imported into the North-West for the use of the person named therein, but it has been ruled in Court that both the permit and the liquor may be held in the possession of a person other than he to whom the permit was issued.
Under the protection of this ruling, saloons are supplied freely with permits and liquor, and it is quite a common occurrence for the Police to find in the same house liquor covered by permits in the names of half a dozen or more different persons.
Liquor is smuggled into the country to replenish the kegs or jars protected by the permits, and it is impossible to prove that the liquor found in such kegs or jars is not that which was originally imported into the country under permits_ a permit may thus be used as a perpetual license unless a case of selling can be established.
If the permit system is to be continued, the undersigned suggests that the law should be amended in such manner as will forbid the transfer of permits and restrict the custody and use of liquor imported there-under to the residence and household of the person to whom the permit is issued.”