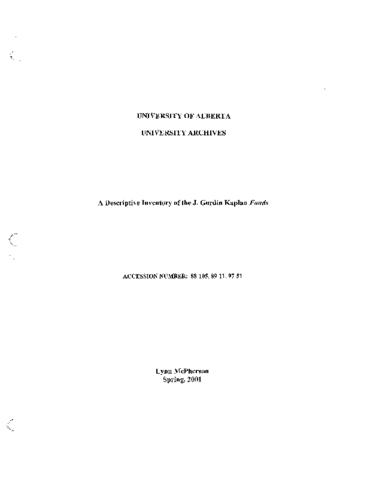 J. Gordin Kaplan was born in New York City in 1922 and received his BA degree from the College of the City of New York and his MA and Ph.D. degrees from Columbia University. His field of study was biochemistry, focusing on cell regulation and the response of mammalian lymphocytes. Kaplan came to Canada in 1950 to teach physiology and biophysics at Dalhousie University in Halifax, Nova Scotia. In 1966, he left Dalhousie for the University of Ottawa where he accepted a position as Professor of Biology. He was appointed Chair of the Biology Department in 1975, a post he held until his departure in 1981 for the University of Alberta. Gordin Kaplan was hired in July 1981 by the University of Alberta for the newly created position of vice-president in charge of research. He was a member of the Biochemistry Department, and responsible for directing the Alberta Heritage Foundation for Medical Research grants. His accomplishments while at the U of A include the initiation of technology transfer activities leading to the creation of the Office of Research Services; the founding of WISEST (Women in Scholarship, Engineering, Science and Technology); and the establishment of the Research Policy Committee and Central Research fund. He was appointed University Professor in January 1987, retiring from the post of VP (Research) on July 1, 1987 upon reaching the mandatory retirement age of 65 years. Dr. Kaplan was very active in a number of Canadian professional associations, serving as President, Canadian Association of University Teachers (1970-1971); Chairman of the Canadian Federation of Biological Societies (1975-1976); co- editor of the Canadian Journal of Biochemistry (1973-1981); and served as a member of the National Research Council Grant Selection Committee for Cell Biology and Genetics. He believed that science should be accessible to the public, and in this pursuit, was a regular guest on CBC's 'As It Happens,' and hosted a primetime CBC television program called Crossfire. Dr. Kaplan supported a number of social causes, including nuclear disarmament, protesting the Vietnam War, and increased support for a national science policy and research funding. J. Gordin Kaplan died of cancer in Edmonton on July 6, 1988. After his death, it was announced that the J. Gordin Kaplan post-doctoral fellowships would be financed in his honor, effective in the 1989-90 academic year.

Fonds consists of the records of J. Gordon Kaplan.