The note reads, "The Hope, Detroit. 25 November 1782. Received from on board his Majesty's Schooner Hope Henry Ford Commander, seven and one half Barrels Bulk of Merchandize as per Bill of Lading No.11 in the Same Condition as Shipped at Fort Erie, the freight of Which I Promise to pay on Demand, to the Naval Store keeper at Detroit, the Naval Store keeper at Carelton Island, Or to the Pay Master General of the Marine Department at Quebec, for Which I have Signed two Receipts of the Same Tenor and Date. Box N.36 Shott half out. (signed) Gregor McGregor for McLeod & Co."

From notes provided by the donor: "Shortly after the outbreak of the American Revolutionary War in 1776, the British Inland Marine (ultimately under the control of Guy Carleton, Governor of Quebec) restricted movement on the Great Lakes to the King's vessels in an effort to control or eliminate the smuggling of goods that might potentially assist the rebellious 'enemy' to the south. Within this arrangement, fur traders and merchants were allowed to have their goods shipped aboard the King's vessels, provided that there was room (over and above the needs of the Navy and other official Military personnel). Goods and furs were shipped aboard the vessels, and 'Freight Notes' were issued to confirm not only the receipt of goods but also to state a promise to pay (at some later date) for the service. In the end, many of these promissory notes were not settled: many of the trades and merchants were summoned to court for non-payment whereas others delinquent in payment were simply dismissed.

Problems aboard the ships were commonplace, and shipments were lost and damaged, with little recourse for compensation. Throughout this period, the traders and merchants (essentially the core of what was to become the North West Company and their opposition groups) complained, and eventually were permitted to have a few of their own private vessels on the Great Lakes to conduct their business activities.

Two years after the conclusion of the Revolutionary war, American and British delegates met in Paris to formalize Britain's recognition and acceptance of the United States of America, and signed the Paris Treaty of 1783. However, the inland maritime restrictions were in place until about 1787, when more private vessels were allowed to operate on the lakes.

This 'Freight Note' is a rare example of fur trade ephemera from a critical period of instability in the region following the British Conquest of New France and the enactment of the Quebec Act. It exemplifies the structured presence and control of the British over the Great Lakes, and the law-abiding fur traders and merchants who wished to continue their trade in the midst of all the chaos and uncertainty.

Normand MacLeod (d. 1796) was an army officer who entered the fur trade in 1774. He developed a partnership with Gregor McGregor, and by 1779 included John Macnamara (a prominent merchant in Michilimackinac) as a new partner. In 1781, he became associated with John Gregory of Montreal in the firm of Gregory, MacLeod and Company (among whose Wintering Partners was a young Alexander Mackenzie). Gregory, MacLeod and Company proved to be the main opposition to the North West Company, and by 1787 were absorbed into the association. In 1790, MacLeod sold his share and retired." 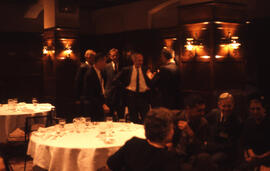 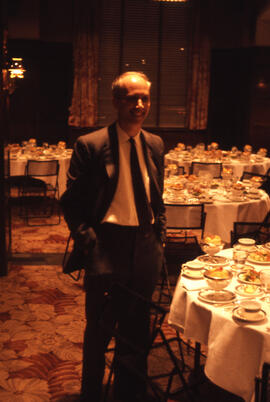 Hume at the Detroit Convention

Hume at the Detroit Convention, Fall 1962. 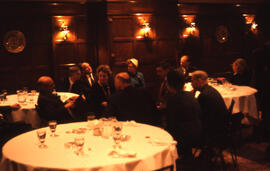