Letter to Marie from Fred White

Typewritten letter from Fred White, N.W.M.P. to Marie, re: a Militia Department cheque issued SBS for his pay and outfit as an Officer of the Transvaal Contingent; the letter is dated January 10th, 1900.

Handwritten letter from Flora Steele at St. Urban's Academy in Montreal to her father in Winnipeg. Flora comments on her father's letter, mentioning her father's father. She has met a Lord Strathcona's veteran, Mr. John Barry, who served with Sam in South Africa, and she asks about Lord Milner. 3 pp. 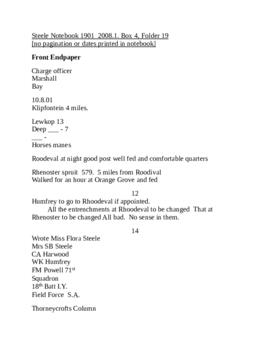 Black leather-bound; hand-written entries Includes identification form at front of diary, addrresses and cash accounts at back of diary 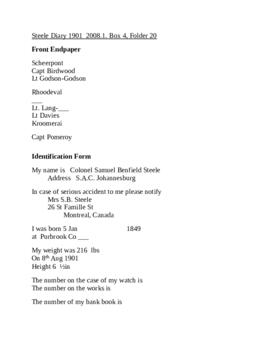 Burgandy leather-bound; hand-written entries Includes identification form at front of diary; addresses and cash accounts at back of diary

Black leather-bound; hand-written entries; more of a notebook One separate item from diary placed behind diary in file, re: Proposed Special Constable Posts

Correspondence sent to Colonel Steele in his capacity as Commander of the Lord Strathcona's Horse; includes continued general correspondence and memoranda around final payments, medals distribution, discharge papers, and tying up of loose ends.

Typewritten letter to SBS from Joseph Colmer, Secretary to Lord Strathcona, with attached memo sent to the Bank of Montreal, re: payment to Steele from W. Munro.

Telegrams sent to Colonel Steele over the course of Lord Strathcona's Horse's service in South Africa.

First page entry: "Militia Order No 26 issued for the formation of mounted corps for special service in South Africa, the Regiment to be called Strathcona's Horse in honour of the Right Hon: Lord Strathcona and Mount Royal at whose expense this force is to be raised and equipped.

Handwritten report sent from SBS to His Excellency, The High Commissioner, Cape Town, re: movement of troops and military strategy.

Roll of men killed in action or who died from other causes in South Africa; list of death certificates prepared for Ottawa.

Roll of men remaining in South Africa on private business.

Handwritten roll of 'Names of Men Recommended for Distinction

Copy of correspondence sent to Steele, re: history of LSH and Steele's reply. Includes a list of names and addresses of original officers of Lord Strathcona's Horse in South Africa, 1900-1901. Original letter is retained in Series 2008.1.1.1.2 - Personal/General correspondence.

Printed Appendix No. 2 to "Notes on the Country to the East and North of Pretoria"; probably used for both Lord Strathcona's Horse and SAC.

Small booklet: a Souvenir Libretto for a Grand Patriotic concert held at the Orillia Opera House on Thursday, February 8th, 1900. Included in the text is a contribution entitled "Canada" by Miss Esther Miller, SBS's cousin.

Printed card from the Montreal Military Institute extending the priviliges of their Institute to SBS for two weeks, at the request of Lt. Col. E.B. Ibbotson, and dated December [1], 1899. Includes envelope.

A printed card for "Strathcona's Horse" for admittance to Lord Strathcona's Luncheon, February 22nd, 1901 at the Royal Palace Hotel in Kensington. On the back of the card the date is printed and another word [Miss?].

An extract from a printed document, with a picture of SBS in his LSH uniform and text recognizing his appointment to Fourth Class of Victorian Order; included is a quote from SBS responding to the King's speech. On the attached page are two photographs of nursing sisters who accompanied the Canadian contingent to South Africa, Sarah Forbes and Marcella P. Richardson. The caption under their photographs is: "Our Own Angels".

Invoice from Ironmongery Warehouse, Cape Town for "1 canteen for 8".

Myers Brothers (Cape Town) invoice for badges; on verso is a list of names and notes related to saddles, etc.

Handwritten list of groceries paid for; no name on memo and pencilled word "cake" on verso

Published Report: Royal Commission on the War in South Africa - Minutes of Evidence (Volume I)

Minutes of Evidence Taken Before the Royal Commission on the War in South Africa (Volume 1). London: 1903 (534 pp.)

Published Report: Department of Militia and Defence - Supplementary Report on The War in South Africa

Department of Militia and Defence of the Dominion of Canada. Supplementary Report: Organization, Equipment, Despatch and Service of the Canadian Contingents During The War in South Africa 1899-1900. Published in Ottawa, 1901. Two copies of report.

S.S. Monterey at dock in Halifax

Buglers on deck of the S.S. Monterey

Col. Samuel Steele with officers on deck of S.S. Monterey

Neptune's Ceremony on deck of the S.S. Monterey

There are ten items in this section; the material all refers to the Boer War in South Africa, and was probably collected or referred to by SBS while taking part in the war with Lord Strathcona's Horse

Mahan, A.T. The War in South Africa: A Narrative of the Anglo-Boer War From The Beginning of Hostilities to the Fall of Pretoria. New York: Peter Fenelon Collier & Son, 1900.

Correspondence related to SAC commissions, and a letter from the Acting Military Secretary to His Excellency The Governor General, granting Steele a two month leave of absence, and directions about how to proceed with his charges agains Captain Fall.

Correspondence related to SAC commissions; a letter from the British National Society for Aid to the Sick and Wounded in War offering to purchase [comforts] for SAC, Canadian Contingent; a decision regarding Captain Fall; a letter from F.W. Borden; and a Royal Warrant confirming grant of Companion of the Bath (Military Division) to Colonel Steele dated 11 May 1901.

Memos; applications for duty; general matters; includes one letter from Lord Strathcona commenting on the fact that many LSH officers have joined SAC.

Memo; general letters including a reference to SAC men being eligible for land grants in British Columbia and Ontario for service rendered during the war.

Memo; letters from the Lydenburg region and correspondence concerning a dental practice, a hospital in the Middelburg District, an invention, and other matters.

General matters; many letters of appreciation sent to SBS.

Correspondence to and from persons/subjects beginning with the letter 'L', including Lezard & Co., Local agents, and lacrosse.

Correspondence to and from persons/subjects beginning with the letter 'R', including James Rogers and Horse Racing regulations.

Correspondence sent to and from persons/subjects beginning with the letter ‘T’, including Transvaal, Transport, Treasure, Transfers, etc.

Correspondence primarily sent to and from the District Commandant at Waterburg District.

Correspondence sent to and from the District Commandant at Zoutpansburg District.