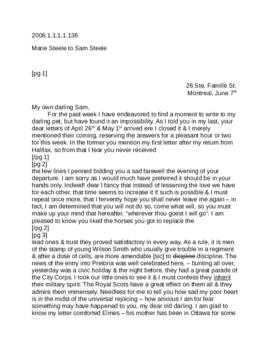 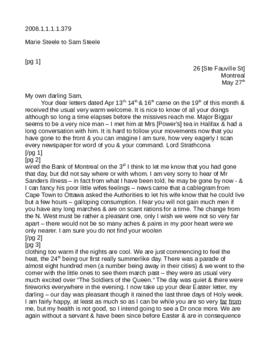 Handwritten letter from Marie in Montreal to SBS in Cape Town, South Africa; 4 pp. and envelope.

Handwritten letter from Flora Steele at St. Urban's Academy in Montreal to her father in Winnipeg. Flora comments on her father's letter, mentioning her father's father. She has met a Lord Strathcona's veteran, Mr. John Barry, who served with Sam in South Africa, and she asks about Lord Milner. 3 pp.

Printed card from the Montreal Military Institute extending the priviliges of their Institute to SBS for two weeks, at the request of Lt. Col. E.B. Ibbotson, and dated December [1], 1899. Includes envelope.

Soldiers of Lord Strathcona's Horse on parade in Montreal

Soldiers of Lord Strathcona's Horse on parade in Montreal

A telegram sent to Marie Steele in Montreal from Sam announcing he has landed at Capetown, South Africa and suffered a heavy loss of horses from pneumonia.

An attached letter from cousin [Sheila] Lindsay in Salt Lake addressed to "My dear Maye".

Letter from Marie to George Scott

Handwritten draft letter Marie has written to George Scott of the Ontario Rifles, thanking him for comments he made about SBS and which were published in a letter to the Globe newspaper. The draft letter is dated April 16th, 1900.

Letter to Marie from George Scott

Handwritten letter to Marie from George Scott of Mount Forest, Ontario thanking her for her letter with enclosed photograph of SBS; the letter is dated April 23rd, 1900.

Handwritten letter from Mary E. Steele in Wales to Marie explaining she is sending photographs of her family which SBS requested when he visited with them; the letter is dated November 10th, 1900.

Handwritten note to Marie from her brother C.A. Harwood discussing among other things, an insurance premium for SBS.