Heart Of My Heat / Only Blood Stains

Once Upon A Playground

The Wind In the Willows

Sub-series consists of the records documenting the Fringe Theatre Adventures play The Wind In The Willows.

Trapped On A Lawn Chair

Sub-series consists of the records documenting the Fringe Theatre Adventures play Trapped On A Lawn Chair.

Sub-sub series consists of records documenting the production of the Fringe Theatre Adventures play Waiting/Dorothy in the Light.

Who Are the Barbarians?

Sub-sub series consists of records documenting the Fringe Theatre Adventures' play Who Are the Barbarians?

Sub-series consists of the records documenting the Fringe Theatre Adventures play Yet Another Musical.

Fire insurance report titled “Supplement No. 1 to Report No. 16 on the City of Edmonton Alberta,” produced by the Western Canada Insurance Underwriters Association, Winnipeg, Manitoba. Includes descriptions of the City of Edmonton’s water supply, fire department and fire alarm system as well as statistics on recent fires and losses, fire flow tests and fire companies.

Postcard that appears to depict the Hudson’s Bay Company store on Jasper Avenue in Edmonton from “Edna”. Short note gives details about an upcoming visit to Westlock. Edmonton, AB.

Service program from First Baptist Church, Minister: Rev. Daniel Young. Features a B&W image of the church and contains announcements and the text of a Canada Day sermon. Edmonton, AB.

One page letter from Clara B. Watts declining an invitation to visit and inquiring about Irma’s baby.  Edmonton, AB.

Envelope produced by the Hotel Selkirk, Edmonton, Alberta, featuring a line drawing of the Hotel.

Blank sheet of stationery with the title “Alaska Highway” and a map showing the route from Edmonton, Alberta, to Fairbanks, Alaska.

PE004741 - Brochure for a sub-surface disc rim packer to plow

Advertising brochure for the Macdonald Hotel in Edmonton, Alberta. The brochure contains promotional text describing the hotel and available accommodations and amenities within, and also features several photographs of the hotel interior.

Promotional booklet on the City of Edmonton, issued by the Edmonton Board of Trade. The inside page contains a brief list of facts and statistics on contemporary Edmonton; affixed to the page opposite is a fold-out photographic feature, with 27 photographs of various locations in the city.

Book titled: "Real Estate Directory - City of Edmonton - Bulletin Press." Cover is in a dark brown, textured material. The interior contains 122 pages of listings, in chart format, of the lots in Edmonton. They have been divided geographically, i.e. River Lot, Hudson Bay Reserve, Norwood, etc. There is a brief explanation at the front of the book describing the nature and reasoning behind the book.

PE004734 - Program for the annual HBC family picnic in Edmonton

Booklet describing the 1933 zoning by-law no.26 put into effect in Edmonton on October 10th, 1933. Cover consists of blue construction paper and contains a crest for the City of Edmonton. Interior contains 41 pages, including an index, detailing the by-law, and providing templates for appeals.

B&W photograph print. This mounted print shows the General Hospital in Edmonton. Founded by the Sisters of Charity of Montreal, the "Grey Nuns," the hospital opened in 1895.

B&W print, of welcome sign on decorated arches with St. John’s Ambulance and Canadian Red Cross signs below, Edmonton, AB. For the Prince of Wales' visit in 1919.

PE004976 - Meeting at Hotel MacDonald for the Northern Alberta agents of the United Grain Growers Assoc.

B&W print, curled into a scroll.  Image shows a meeting at Hotel MacDonald for the Northern Alberta Agents of the United Grain Growers Association.

PE000698 - Souvenir Album “from the University of Alberta, Edmonton with compliments of F. P. Galbraith, Chancellor on the occasion of The Diamond Jubilee 1968”

Album titled “from the University of Alberta, Edmonton with compliments of F. P. Galbraith, Chancellor on the occasion of The Diamond Jubilee 1968.” Subjects include Dr. W. G. Schneider, President of the National Research Council, Prime Minister Pierre Trudeau, and U Thant, Secretary General of the United Nations, who were given honourary Doctor of Laws degrees on May 13, 1969; all ten photographs are described in a list on the second page.

There is a brief biography of the subject and his connection to Alberta. Unless otherwise noted, the photographs are in very good condition; the majority measure 11 x 7cm. Nearly all photographs are in B&W. There are three colour photographs, two of which do not have an indication of the location depicted, and one of which depicts a lookout on Mount Royal, Montreal.
Photographs depict various locations within Alberta, such as:

The origins of the album are unclear, but it could be the record of British immigrants to northern Alberta. The verso of the loose portrait contains a photographer's stamp that includes a Westbourne Grove address, a retail area of west London. Several of the earliest photographs appear to be taken from a ship in the Gulf of St. Lawrence (including a picture of an iceberg), which could indicate a trans-Atlantic trip.

The majority of photographs, however, are from Alberta locales: Fallis, Rexboro, Lake Wabumun, and, most commonly, Edmonton. The album contains several photographs of the Hudson's Bay Company's 250th anniversary pageant held in Edmonton on 8 May 1920. There are also Edmonton images of the University of Alberta, cutting ice from the river, and Cree and Blackfoot participants in an unnamed 1922 event.

Many of the images are of individuals - presumably family members and friends - in agricultural and other settings. The captions do not always fully identify the subjects, but several surnames are mentioned: Bennett, Cannell, Margerison, Warning, Mullett, Merryweather, and Mills.

PE001558 - Photographs: [Agricultural and prospecting images of the Edmonton area]

The 10 annotated photographs capture a drilling rig being used to search for coal. The location of Whyte Avenue and 7th Street [likely an Edmonton address] is noted in one caption. The other images are predominantly of agricultural scenes.

Program titled: "The Law Students Society of Northern Alberta Complimentary Dinner given at Cronn’s Café, Edmonton, in honor of J.M. MacDonald, B.A.B.C.L., W. Poapst, B.A., R.W. Manley, P.W. Abbott, J.D. Munroe, B.A., W.J.A. Mustard and Edward Brice, B.A. On the occasion of their admission to the Bar. Friday, October 15, 1909." Below this, there is a saying in Latin: "Lex semper dabit Remedium" (The Law always gives a remedy). There are two red seals next to this phrase, and the invitation is bound with a purple ribbon. The writing throughout the card is also in dark purple, and contains a menu and a list of toasts. The back cover is blank aside from the publisher’s mark, which is indicated as Keystone Press.

Program booklet for “An evening devoted to Peace and a better understanding between individuals and between nations”, held at the Normal School auditorium in Edmonton, Alberta. Contains the events program, which features two plays, and their associate cast lists, acknowledgements, and a number of advertisements for products and local businesses.

Program for the Grand Diamond Jubilee Confederation Pageant, held in Edmonton. Includes a program for the performance, as well as a comprehensive list of cast and performers. Additionally, a substantial number of advertisements for products and local businesses are included alongside the text.

Vol. 49, No. 13,514 (June 17, 1893) of the Saturday Globe. The feature article “Edmonton and the Saskatchewan Valley” provides a description of Edmonton and the surrounding environs. As the municipality was still small at the time of writing, much of the content revolves around rural living; however, there is still an in-depth exploration of major Edmonton landmarks and businesses. Accompanying photographs depict both landscapes and scenery outside Edmonton, as well as major buildings within the municipality.

The Globe newspaper, to which the Saturday Globe was a supplement, is bound to the back of the supplement. However, the parent newspaper does not appear to carry substantive content on the Prairie Provinces. Both the supplement and its parent newspaper carry, in addition to articles and editorials, a number of advertisements for products and businesses.

PE004923 - Invitations to the 35th Annual Edmonton Historical Board Awards ceremony and to the opening of “The Other Side of the Mountain: Glimpses of Chinese Pioneer Life on the Prairies”

Invitation to attend the 35th Annual Edmonton Historical Board Recognition and Plaque Awards ceremony.  Award recipients include Vern Wishart; Alan Vanterpool; Peel’s Prairie Provinces Website – University of Alberta Library; Jewish Archives and Historical Society of Edmonton and Northern Alberta; Capital Modern Exhibit – Art Gallery of Alberta; Wallbridge Residence; Marshall Residence; Dean/Kuperus Residence; Chandler Barn; Highlands Community; Strathcona Community; Westmount Community.  Included with the invitation is an invitation to attend the opening of an exhibit entitled “The Other Side of the Mountain: Glimpses of Chinese Pioneer Life on the Prairies from the Wallace B. Chung and Madeline H. Chung Collection” at the Bruce Peel library.  Both items are in good condition.

Invitation to “Mr. McAra” from the Agricultural club to attend an Undergraduate Dance held on February 8, 1929 in Athabaska Hall at the University of Alberta. The front of the card is shaped and illustrated to look like saloon doors. Inside the card is a dance program filled in with the names of Mr. McAra’s dance partners from the evening. Edmonton, Alberta.

Promotional booklet issued by Sommerville Hardware Co. Ltd., on the occasion of the 1913 Edmonton Exhibition. Contains advertisements, primarily for Sommerville Hardware, or for items sold by the company, but also contains several pages of advertisements for the Edmonton Metal Works Co. Ltd. The back cover features descriptions and directions to city parks in Edmonton.

PE000110 - People sitting beneath tipi frame next to tent and carts

PE004806 - Propeller airplane on a grassy field in Edmonton, surrounded by a crowd of onlookers

B&W photograph depicting an old propeller plane on a grassy field, surrounded by a crowd of onlookers. Two men in the foreground can be seen running to different locations. The back of the photograph has a handwritten note: "Taking a flight with...(illegible) May at Edmonton."

Photograph of a man on a horse drawn cart full of stuffed bags (likely grain). They are standing in front of the A. MacDonald Building in Edmonton. The cart has a sign on it that says “Alberta Pacific Grain Co. Ltd – phone 2249”

All Over the Map - Script

Draft of Fringe Theatre Adventures play with annotation and comment.

If I'd Been There - Script

File contains script for the play If I'd Been There.

Work It Out - Script

File contains an annotated script for the play Work it Out. 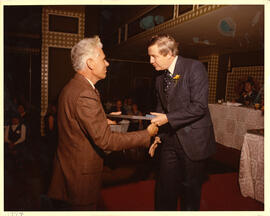 Harris being awarded the Government of Alberta's Achievement Award by Premier Peter Loughheed on November 2, 1974.

Part of Chancellor and Senate fonds

Sub-sub series contains promotional and production records for the Chinook Theatre production of the play Professor Arlecchino. File also includes a seasonal brochure for the Spring Tour and a Teacher's Study Guide.

Sub-sub series consists of records documenting the productoin and promotion of the Chinook Theatre production of Tartuffe.

50 yrs. of Those Marvelous - Musicals

Sub-sub series consists of records documenting the production of the Fringe Theatre Adventures play 50 yrs. of Those Marvelous Musicals.

A Day In Hollywood/ A Night In The Ukraine

A Life In The Theatre (Babel Rap)

A Morality Play For The Leisured Class

Sub-sub series consists of records documenting the production of the Fringe Theatre Adventures play Down on Down.

Dylan - Portrait of A Poet

Sub-sub series consists of records documenting the production of the Fringe Theatre Adventures play Dylan - Portrait of a Poet.

Gone With the Fringe - Administration, Operations, and Publicity

Sub-sub series consists of administrative files concerning the administration of the sixth Fringe festival: Gone With the Fringe.

Look Back In Anger