General Correspondence – Telegrams and many letters congratulating Steele for his military appointment to South Africa; includes letter from his brother Jim; a note from his former instructor at the Military School in Toronto, Sergeant Major Teddy Rundle; and a letter (with accompanying letter of testimony) from Henry Boyle-Runnals, a doctor who practiced in the Klondike. Boyle-Runnals provides a letter of testimony to swear to Steele's character and that he never saw him under the influence of alcohol. Included also is a letter from H.B. Jayne in which he discusses the upcoming Manitoba election, Clifford Sifton, and other politicians including James Allan Smart. Handwritten; Typewritten. 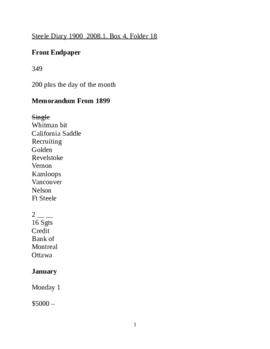 Correspondence sent to Steele related to his retirement from the NWMP and his superannuation.

Correspondence to Steele from Comptroller Fred White discussing Steele's NWMP pension; enclosed with White's letters is a copy of the order retiring Steele from the NWMP (March 1, 1903), a copy of a statement detailing Steele's pay received and to be received as pension, and a copy of a letter from the Auditor General concurring with the statements made by White, re: Steele's pension payments.

Correspondence sent to Colonel Steele in his capacity as Commander of the Lord Strathcona's Horse; continued general correspondence and memoranda around final payments, and tying up loose ends; includes a list of the non-commissioned officers and constables of the NWMP who served with the Corp under Steele's command and a letter from Minister F.W. Borden acknowledging Steele's request that men from LSH be allowed to join the South African Constabulary.

Letter to Marie from Fred White

Typewritten letter from Fred White, N.W.M.P. to Marie discussing the Pension Bill, and hoping to see Marie before she departs for South Africa; the letter is dated August 8th, 1902.