General Correspondence – Letters sent to Sam Steele upon his return to England from the Boer War in South Africa; includes invitations, general congratulatory notes; and many inquiries from families of men enlisted in the Boer War. Handwritten; Typewritten.

General Correspondence – As above. Handwritten; Typewritten. 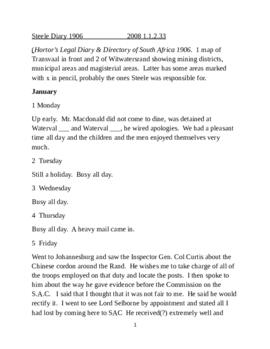 Telegrams sent to Colonel Steele over the course of Lord Strathcona's Horse's service in South Africa.

A printed card for "Strathcona's Horse" for admittance to Lord Strathcona's Luncheon, February 22nd, 1901 at the Royal Palace Hotel in Kensington. On the back of the card the date is printed and another word [Miss?].

A seating plan for a dinner given by Lord Strathcona at the Savoy Hotel, London to meet Earl Roberts, Field Marshal, February 22, 1901. LSH officers were invited to the dinner.

Memo about "Tailor in London"

Group portrait of Lord and Lady Strathcona with officers