The Byron Kratochvil fonds documents the professional career of an important teacher, researcher, writer and administrator who was associated with the University of Alberta for over thirty years. Dr. Kratochvil attained recognition as a respected analytical chemist, and served the University of Alberta as a professor of Chemistry, chairman of the Department of Chemistry, and as an administrator in his role as Associate Vice-President (Research). The records, largely textual, document Byron Kratochvil’s career at the University of Alberta, but also touch upon his earlier teaching experiences and research interests. The records provide a significant documentation of Kratochvil’s teaching career, with several files of lecture notes, student examinations and projects, and class records. Also strongly represented in the fonds, are the records generated from the textbooks written by Kratochvil and W.E. Harris and originally computer-published by the University of Alberta. Various drafts of the textbooks are retained in the records, complete with numerous annotations, inserts, corrections and research notes. There are fairly complete files of Chemistry Department-related records in the Kratochvil fonds, which include meeting minutes, internal memorandum, and committee reports retained on an annual basis. Byron Kratochvil was chair of the Department of Chemistry from 1989-1995, so the Department material for these years provides insight into the role of the Chairman, and the relationship the Department had with the larger Faculty of Science it reported to. Included also are the documents generated by the various University committees and research groups Professor Kratochvil sat on; of particular note are detailed files related to the Environmental Research and Studies Centre. A smaller series contains records generated during Byron Kratochvil’s time as Associate Vice-President (Research). A comprehensive set of Byron Kratochvil’s professional correspondence forms one series, and provides a record of his written communication with colleagues, graduate students, and scientific associations, relating to his research and various other issues. Among Kratochvil’s research interest topics are those in the area of the theory and application of sampling for chemical analysis; the measurement of free metal ion concentrations in solution; and the development of new analytical reagents and methods in nonacqueous solvents. Two smaller series contain documents linked to professional associations Professor Kratochvil supported, with textual and photographs items documenting scientific conferences and workshops he attended; as well as consulting work undertaken. The final series in this finding-aid consists of material designated as ‘personal’, although still very related to the series that precede it. Included here are copies of personnel documents related to salary and promotions, copies of CV’s and biographies as well as day planners and collected archives. The records are in excellent physical shape and because of their completeness and the broad span of years represented, provide valuable insight into one man’s career at the University of Alberta.. 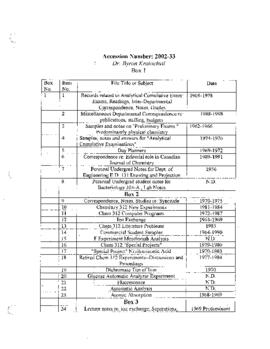